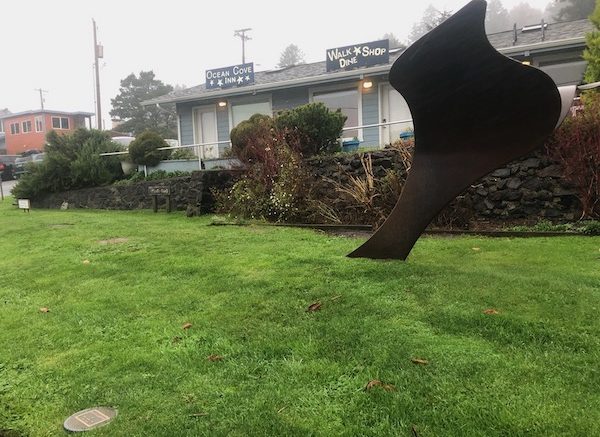 The last time our family went to the Oregon Coast was in November for Florence, Oregon’s annual Exploding Whale Memorial Celebration. I wrote about that visit, which sounds strange, but this post explains how the event came to be and why it has become an annual community celebration. Well, there were some things we wanted to do on that trip that we didn’t get to do. And luckily, we had booked a yurt for a couple of days after Thanksgiving as a quick getaway.

Booking A Yurt At The Oregon Coast

Our family is avid campers, but sometimes it’s just easier to not have to pitch a tent. We are always traveling with two small dogs, so having everyone and everything in tents sometimes isn’t as nice as we would like. The last two years when we have camped at the Oregon Coast we have rented a yurt at View Park Details
Jessie M. Honeyman Memorial State Park in Florence. We’ve written another post about family camping in a yurt on the Oregon Coast so read up on that if you want to know more. First, head over to the Oregon State Park website to reserve a yurt. What’s a yurt, you may be asking? A yurt is a waterproof and snug structure modeled after the huts used by nomadic tribes across Central Asia. 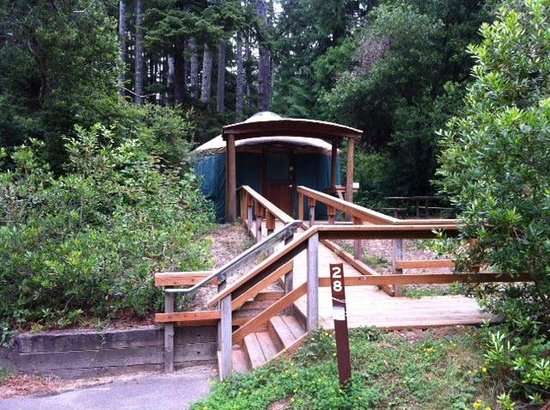 A yurt at Honeyman State Park in Florence, Oregon. 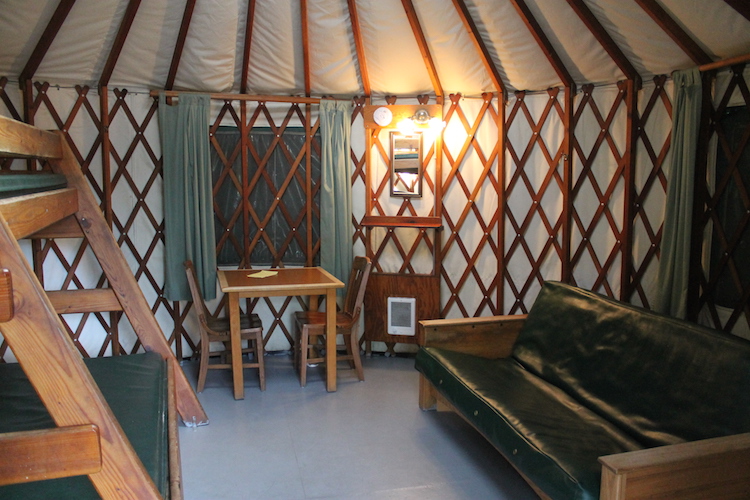 Inside a yurt at Honeyman State Park in Florence, Oregon.

Staying in a yurt on the Oregon Coast is a good way to go because the yurt is warm, with an electric heater inside and lights. There is a bunk bed and a fold-out couch, so two adults and two kids, along with two dogs, can sleep quite comfortably. There is a small extra charge for pets. Outside of the yurt is everything you would expect at a typical campsite: fire pit, picnic bench, water spouts, place to park your car, etc.

On Saturday, which was the primary day we had set aside for ourselves to go out and do some things, the weather was TERRIBLE! Really. It was raining hard, cold, and very windy/ Whenever you’re at the coast, plan for windy, wet weather. You’ll be sorry if you don’t, and happy if you do and you don’t need the extra layers.

One of the things we had heard about was a dead whale that had washed up on the coast in Yachats, which is about 30 miles north from the state park. By the time we got there to check out the whale, it had been a couple of months. Still, we had also heard that the whale carcass kept washing up on the beach and then floating back out on high tides, and was still there. We stopped at the Yachats Chamber of Commerce to ask for directions to where the whale was, and they told us almost exactly where to go. We walked around in the wrong place for a bit (and our kids gave up and went back to the car because, as mentioned before, of the TERRIBLE weather! The adults didn’t give up though. We found the whale, but by then there was nothing left but the hide. It had been washing up and then washing out, but then had ended up trapped in a rocky inlet, where it was being pushed continuously against the rocks. All you could see was a light-colored patch floating in the rough water. Some people might thing this is morbid, but I think this kind of stuff is cool. At at a wild place like the Oregon Coast, you never know what you’ll see. 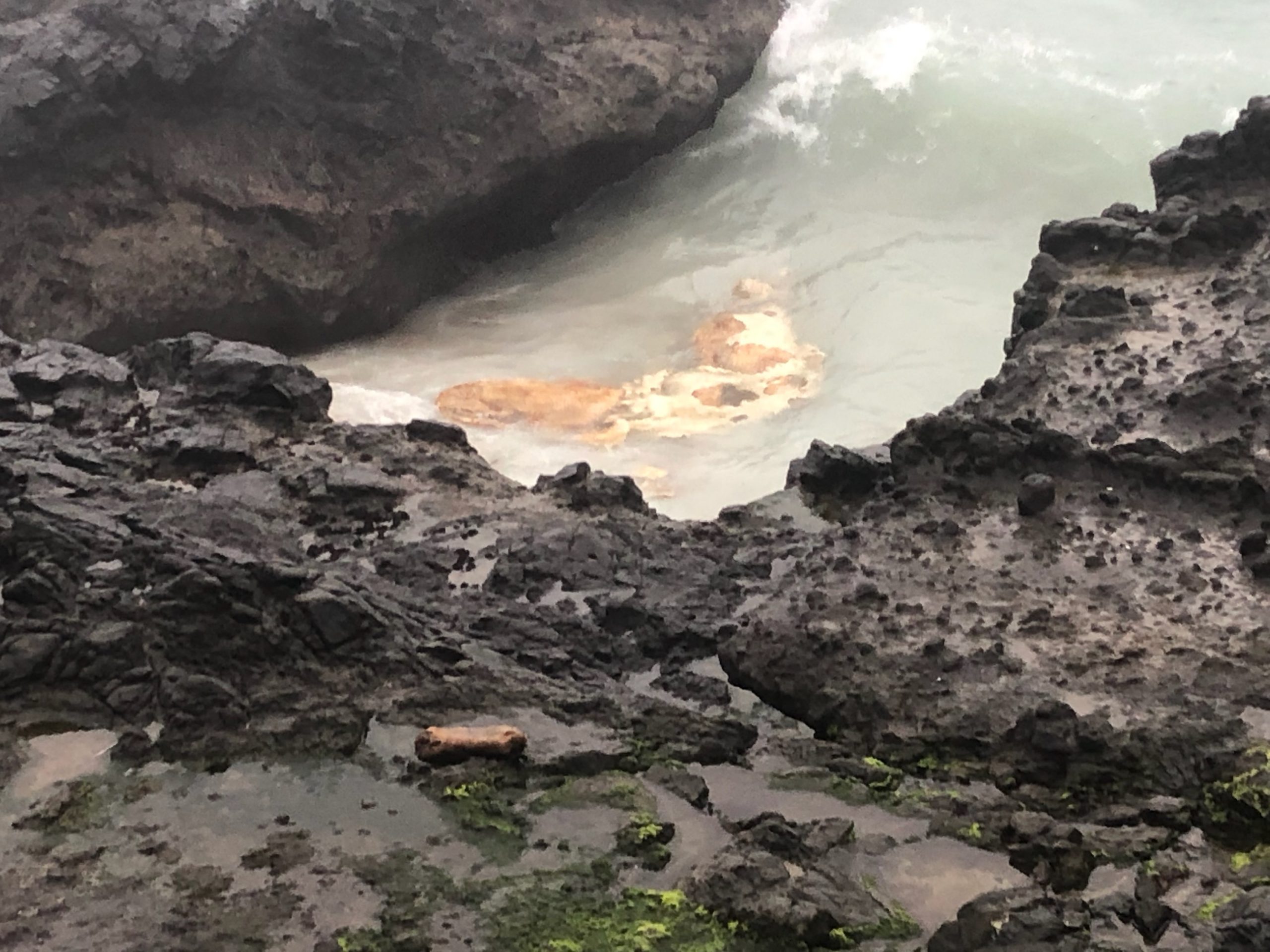 A whale hide in the rough water at Yachats in Oregon.

While we were in Yachats, we stopped at Styx, Stones n Bones, a really cool gem and fossil shop with a full-size juvenile Tyrannosaurus Rex skeleton along with rocks and minerals of all types. They’ve named her Betty! We stopped and got a coffees for the adults and ice cream cones for the kids at Toppers Ice Cream. It’s a cute little shop and if you’re walking around downtown Yachats, everything is basically all on the same street. 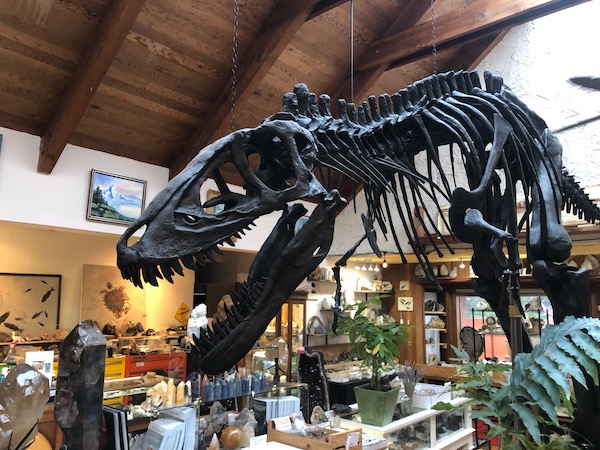 The Whale Park in Yachats

The kids were ready to be done and head back to the yurt but I wasn’t. The yurt has heat inside, and did I mention that the weather today was TERRIBLE? At any rate, I made them make one more stop, which we essentially drove right past on the way back to the campsite. We stopped to pay a visit to Bazalgette the Spewing Whale in Whale Park in Yachats. 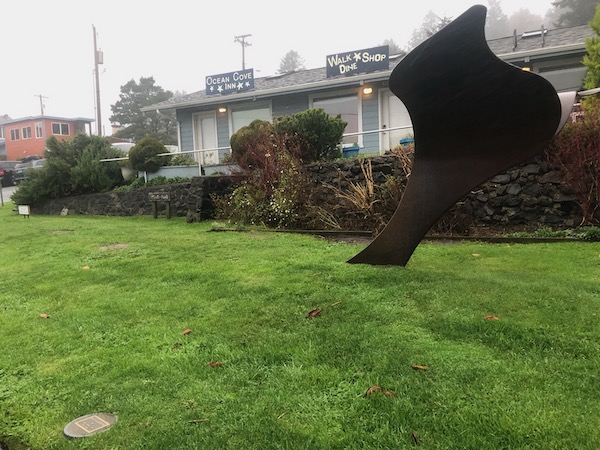 Now, calling this site a “park” may be deceiving. It technically is a park, but it’s really just a patch of grass about the size of a living room in front of a hotel. But, there’s something unique about it. An artist installed a bronze whale tail coming out of the grass, and a plaque identifying the whale as Bazalgette. I had heard about the spouting whale but never actually stopped so today was the day. I didn’t realize, however, that the spout is turned off in the winter. During the summertime, Bazalgette swims beneath the grass and spouts every minute. This would be a fun place to take your little ones during the warmer months. Just don’t lose track of time or you’ll be soaked! Since Bazalgette wasn’t spouting today, we’re definitely going to go back this summer and see if for ourselves. Find Bazalgette at Whale Park at 140 Prospect Avenue, Yachats, Oregon.

Great Books for Getting Kids Outside