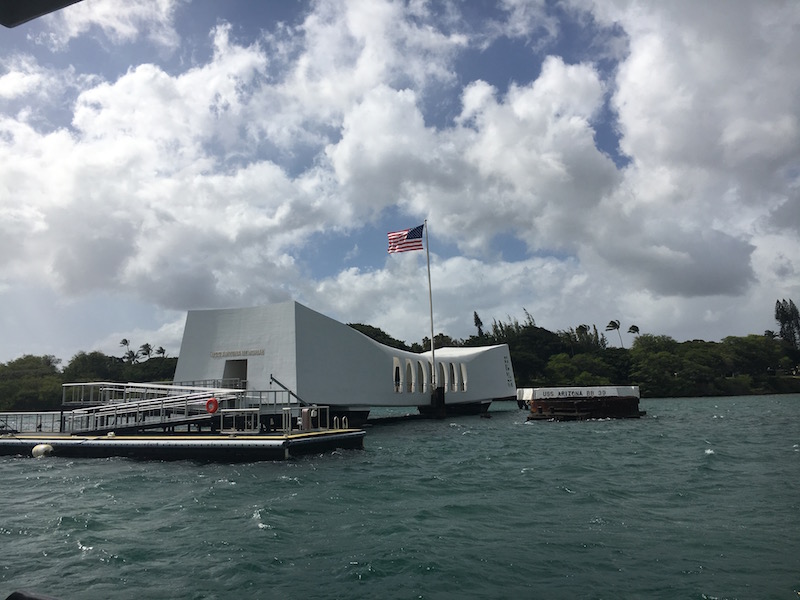 Earlier this month, before the Coronavirus stopped us from traveling beyond the comforts of home, I traveled to Honolulu, HI on a business trip. Arriving on a weekend, I had made advance plans to visit the Pearl Harbor National Memorial, a place of great historic and national significance.

The final resting place of 1,102 of the 1,177 sailors and Marines killed on USS Arizona during the Japanese surprise attack on Pearl Harbor on December 7, 1941, the Pearl Harbor National Memorial is a place you should make time to visit while on Oahu.

In advance of your trip, visit recreation.gov to secure a limited number of guaranteed free tickets available for the day of your visit. I consulted this site approximately two months in advance of my arrival date and found myself out of luck.

A range of tours and ticket packages are listed on the official memorial website (honestly, I found this a bit confusing) and I selected the USS Arizona Memorial and Narrated Headset tour for $7.50 as this was listed as the “most popular” tour and at two hours seemed like a sufficient amount of time for the experience.

In researching this story after-the-fact, I now realize the bulk of this cost was for headsets as part of the “self-narrated” component and we could have still visited the site and taken the shuttle-boat out to the USS memorial for as little as $1. No matter, $7.50/ticket is a small price to pay for the upkeep of the grounds, utilities, salaries, etc. 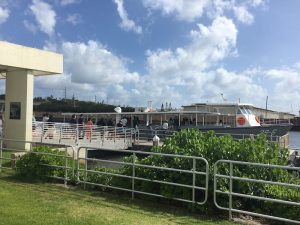 Reserving two tickets for the 3pm tour, we arrived at 2:45, which left just enough time to sort out checking my purse at the “oversize bag” kiosk for an additional $5. If you have a backpack, camera bag, diaper bag, or anything larger than a small wallet or cell phone, you’ll need to return to your car or join me in this surprise additional expense. 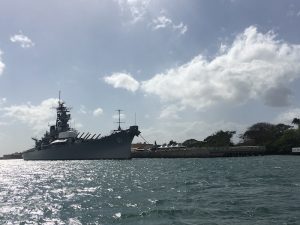 Our “self-guided” tour began in an indoor theater for a viewing of a short documentary summarizing the attack on Pearl Harbor with real footage from the bombing and interviews from citizens and soldiers who survived to recount the event. Exiting in the direction of the 150-passanger shuttle boat out to the USS Arizona, Navy soldiers informed us the water was too choppy to safely dock at the 184-foot-long iconic white memorial structure that straddles the hull of the boat. Sagging in the middle, the memorial represents the “height of American pride before the war, the nation’s sudden depression after the attack and the rise of American power to new heights after the war” (Wikipedia). 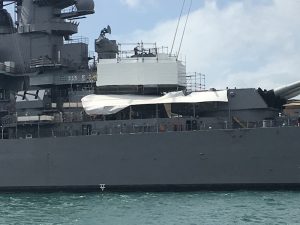 After passing the memorial itself, our boat passed the USS Missouri,  the last battleship commissioned by the United States. Best remembered as the site of the surrender of the Empire of Japan, which ended World War II. The white awning shown in this photo protects the deck of where Japanese envoys Foreign Minister Mamoru Shigemitsu and General Yoshijiro Umezu signed their names on the Instrument of Surrender in Tokyo Bay on September 2, 1945. 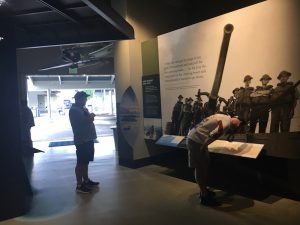 Returning to the island, we spent the remaining portion of our visit exploring the museum, grounds, and giftshop. We would have liked to explore the USS Bowfin naval submarine, but this required an additional ticket fee and we were running close to the 5pm park closing time. That said, it appears the park is nearing completion of a museum expansion dedicated to the USS Bowfin Submarine Musem & Park. 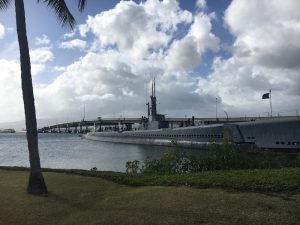 Hopefully everyone is safe and sound and we are able to visit places like the Pearl Harbor National Memorial again soon. For more ideas on how to remain curious about the world, check out this story Vanessa Salvia wrote about virtual travel and free museums.