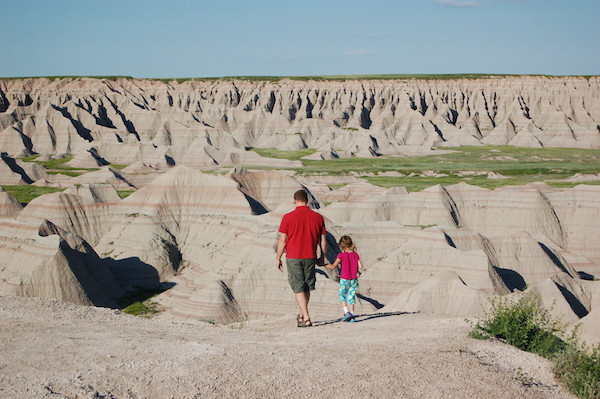 A trek from one end of South Dakota to the other was coming to an end in a most dramatic way.
We could spot the approaching storm across the low rolling land near the border of Wyoming. The simple two-lane highway meandered seemingly nowhere, with no apparent civilization for miles in any direction. That’s when my daughter felt ill and we pulled to the side of the road. Within seconds of returning to the car, heavy rain engulfed us, nearly obscuring what little of the road was already visible. Thunder and lightening seemed to surround us on all sides as we followed the direction of the GPS.
My kids’ faces were transfixed on the tempest outside instead of electronics as my husband and I led songs and cracked jokes to lighten the mood despite our own trepidation.
Five days earlier in sunny weather we set our sights on DeSmet, heading west from Minneapolis, to see the former residences of Laura Ingalls Wilder. Reaching the visitor’s center of the Wilder’s Historic Homes we took a tour that brought the Little House on the Prairie book series to life. We were in the midst of reading Ingall’s book, The Long Winter, so lunch at Ward’s Store and Bakery offered the perfect downtown vantage point. We could imagine how the buildings across the street had disappeared from view during the huge snowstorm more than a century earlier. Ward’s also has many trinkets for sale which can be a welcome distraction or an annoying hinderance, depending upon the nature of your children. 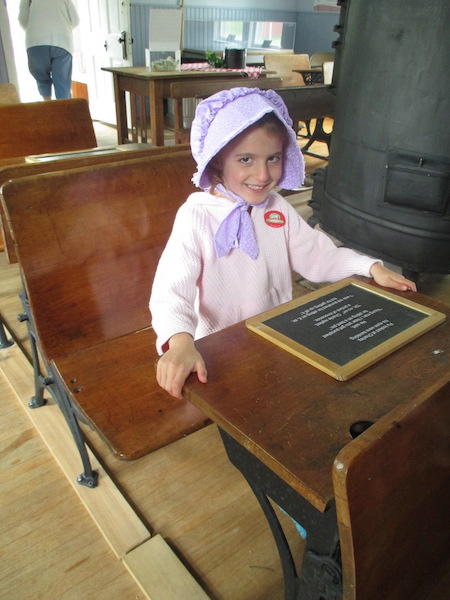 Bellies full, we drove an hour south to Mitchell, home of the world’s only Corn Palace. Each mosaic covering the palace is a work of art, made from corn, grains, and grasses. We ventured inside the building for snacks and restrooms, but found it more interesting to view the exterior mosaics being updated. 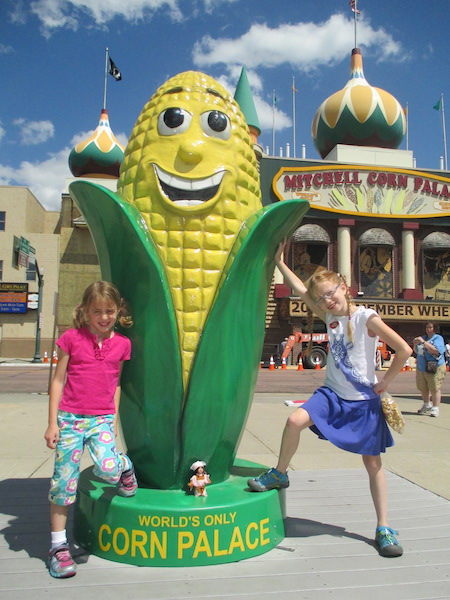 The Corn Palace mosaics can be found outside and inside the building. (photo by Heather Lusk)

The drive from Mitchell to the Badlands National Park entrance is roughly three hours, but near the entrance we stopped at Prairie Homestead to see white prairie dogs and various styles of relocated homes. My daughters loved chasing the animals from hole to hole, burning pent-up energy from the last leg of the day. Then it was a quick drive to the Interior Entrance to the Badlands and Cedar Pass Lodge, the only place to stay and dine inside the park. There are plenty of spots to stop in the Badlands for short hikes and photographs, as you can see in the header image in this post (photo by Heather Lusk).
The loop within the Badlands is simple and heads directly to Cedar Pass Lodge. Rooms were comfortable with decent views. The next morning we continued the loop to the Pinnacles Entrance Station towards the town of Wall. 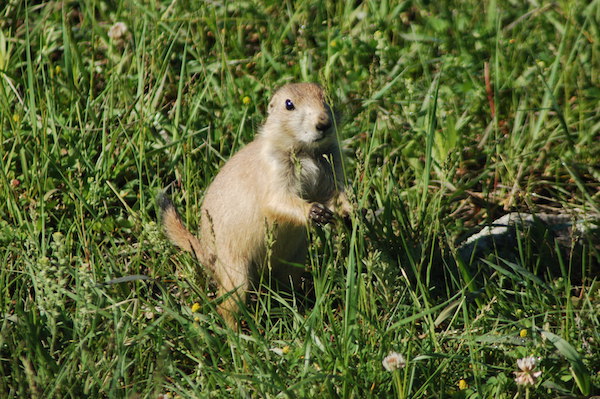 Prairie dogs abound in South Dakota, contributing to plenty of entertainment for all ages. (photo by Heather Lusk)

An early departure meant lots of wildlife sightings along the way: bighorn sheep nimbly hopping atop the rocks, pronghorns staring vacantly across the landscape, and small herds of bison. The early hour also meant more majestic and beautiful scenery, with the morning light capturing the rings along the rock face not easily visible when the sun is overhead. At each stop to observe animals we also navigated mini hikes along marked paths. 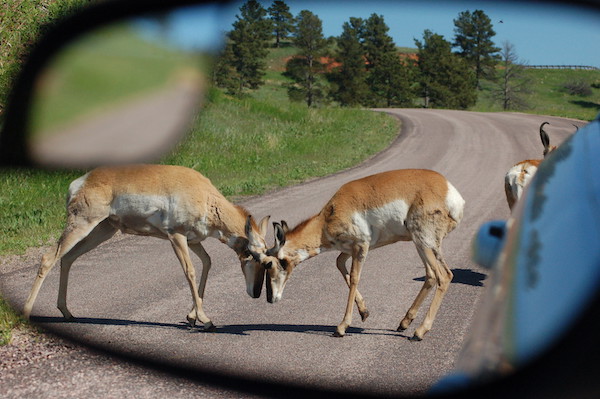 Leaving the park I was determined not to stop at known tourist trap Wall Drug, but by that time a bug had overtaken my daughter and me. Quiet and clean facilities were in need versus the rustic (though frequent) options in the national park.
Wall Drug Store obtained notoriety during the Great Depression by offering free water to passing customers. The store has grown into a 76,000-square-foot spectacle with an old fashioned soda fountain, restaurant, and Western goods shop. Children can pan for gold, investigate fossils, or pose with a variety of giant statues.
After exploring Wall Drug and replenishing our supply of hand sanitizer, we drove an hour to Rapid City where statues of presidents line the streets. The City of Presidents Information Center has clean restrooms and information about each statue. A free walking tour and map is available at downtownrapidcity.com. Unique restaurants abound in the area, making it a great lunch spot before the drive to Custer where we chose the Holiday Inn in Custer for the benefits of a pool and free breakfast.
Two days in the area allowed for unexpected weather and plenty of recuperation. Fog prevented viewing Mount Rushmore one morning, so instead we drove through the Black Hills National Forest. The 1.2 million acres are filled with wild animals easily spotted roadside. The Crazy Horse Memorial required half a day to experience unique cultural programs and learn about the massive sculptural undertaking.
Leaving for Wyoming on day five, we encountered the immense squall that surrounded us. By the time the storm passed thirty minutes later my family was laughing hysterically, thrilled by the terrorizing experience at the end of our packed journey to the edge of South Dakota. 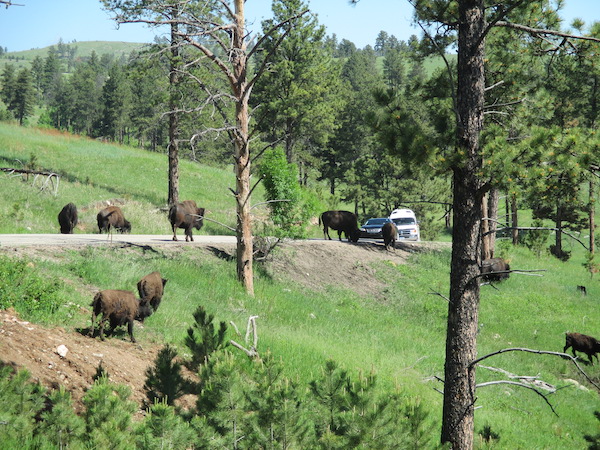 Where do the buffalo roam? On the roads of the Black Hills National Forest. (photo by Heather Lusk)

About the author:
Heather Lusk is a freelance writer who loves travel and history. Between dragging her family to exotic locations, she’s attempting to maintain a 120-year-old house in Zionsville, Indiana.