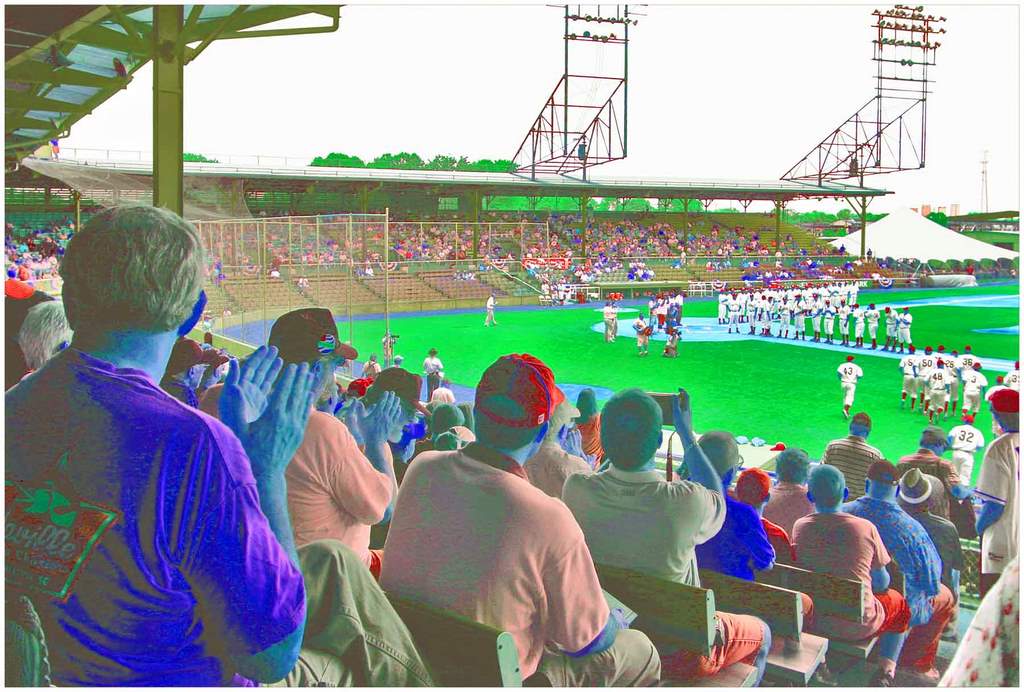 You love sports. And, before the kids you used to travel to sporting events at will. Now, it takes more planning, sure, but there are things your kids should see with you, before they get too old to want to be seen with you. We asked Robert Tuchman, author of The 100 Sporting Events You Must See Live: An Insider’s Guide to Creating the Sports Experience of a Lifetime for the Top 10 events you should see as a family. Not surprising, baseball tops the list, with six of the top ten being baseball events. But, there are a couple of surprises as well.

Rickwood Field
Built in 1910, Rickwood Field is America’s Oldest Baseball Park. It has seen players like Babe Ruth, Ty Cobb, Joe Jackson, and Willie Mays. Rickwood Field has never been anything but a baseball stadium, and there’s no better way to forget about performance enhancing scandals than to return to the roots of the sport. Tuchman recommends visiting between February and October, and with free tickets available to most of the 200 events held at the field each year, it’s easy on the budget.

Special Olympics
A non-profit organization targeting nearly 200 million people around the globe with intellectual disabilities, Special Olympics offers year-round training and competition in 30 Olympics-style summer and winter sports every four years in July. Tuchman recommends celebrating the opening and closing ceremonies, he says they are some of the most anticipated celebrations of every Special Olympics. He also recommends the Sports Experience, a promotional event held during the Games. It’s open to the public and features food, live performances, and opportunities to play games and compete against the Special Olympics athletes. To prepare for your trip, volunteer in your area to help your local athletes. Your family can have a powerful and life-changing journey without traveling anywhere.

Fenway Park
The oldest stadium in MLB today, Fenway Park is home to the Boston Red Sox and the notorious Green Monster. Manual scoreboards and pillars that hold up the upper deck keep with tradition, and Red Sox fans are as fanatical as ever. Tuchman recommends hopping the T or taking the Commuter Rail to the game, due to excessive traffic around the stadium during games. Go early to the game and stroll down Lansdowne Street or Yawkey Way right before the game. Experience the stadium before the game, it’s very small and intimate and there are no bad seats. Tuchman recommends going to a game in June as he believes May to be too busy in Boston with graduation ceremonies for the many colleges in the area. Also, he says to plan ahead because tickets can be very hard to get. Don’t forget your baseball gloves if you’re in a foul ball section.

Tennessee Lady Volunteers Basketball
Coached by Pat Summitt since 1974, the Lady Vols are the only team to have appeared in every NCAA tournament since the 1981-1982 season, when the NCAA first sanctioned women’s sports. They’ve appeared in 18 Final Fours and won eight NCAA titles, including an undefeated 1998-1998 season. Summitt is the winningest coach in NCAA basketball history, men or women, any division. She’s also one of only two collegiate coaches with 1000 victories.

Tuchman recommends staying in your seat for the entire game, every second should be enjoyed. The best seats are in sections 119-123.  He also recommends the “guest coach program” for the ultimate interaction. One individual is selected per game by the Tennessee Athletic Department to sit behind the coach, attend the half-time locker speech and basically be a fly on the wall for the post-game. Also, play special attention to the player introductions, they are considered the best in women’s college basketball.

MLB Opening Day in Cincinnati
The Cincinnati Reds are the only team in baseball to open every season at their home field, the Great American Ball Park. Home to the first professional sports team in history, the whole city of Cincinnati comes out to celebrate the first of 162 Reds’ games. The best way to enjoy the action, says Tuchman, is along the left field line. There are 400 Mezzanine seats in the all-inclusive food and ticket area. All you can eat traditional food is located nearby, for a reasonable price.

If you’d rather be up close, the Diamond Club seats give you the best look at the Reds and their opposing team. Before the game, the Reds Concert Series on the Bud Select Stage has live music and the Fan Zone has food, drinks and more music. Tickets are required for the concert, and you should purchase them prior to arriving at the stadium. Take your kids’ picture along the “Topps Photo Walls” and work off some steam at the Recreation Outlet Playground.

Texas Football Friday Night Lights
Odessa, Texas has not forgotten High School Football. Odessa residents have stayed loyal to their Permian Panthers year after year, and after the book, movie and TV show, they are now a household name. The tradition of Panther/Mojo football has continued for 40 years, and this year your family can catch some of the Mojo on a road trip to Odessa for Friday Night Church.

Tuchman says any Friday night game will work, but make sure you get your tickets early as many fans camp out days before a big game for tickets. Pick up your tickets at Permian High School’s Administration Building. They usually go on sale Tuesday morning the week of the game. Obviously, watch the game from the home team side, for the best energy. After the game, fans line up against the fence on the north end of the field. Win or lose, the fans go wild for their team. The game day pep rally at Permian field house is fun, and Halloween is a great time for the kids because as far are in costumes.

Little League World Series
Talk about bringing back the fun and innocence of the game. You’ll probably have to ignore some bad parental behavior, but how could the kids get any cuter, or more inspirational to your own kids? The Little League World Series takes place every August in Williamsport, Pennsylvania. Started in 1947 as a tournament for ages 11-13, Little League Baseball has grown to include countries from around the world. 16 teams, eight from the US and eight from other countries, compete in a round-robin tournament in their own bracket until a winner is decided, then those two teams play for the World Series title.

Tuchman recommends the right field stands for maximum shade during afternoon games. Seating is first-come, first-served for the preliminary games in most areas of Lamade Stadium and Volunteer Stadium, so get there early. If you didn’t get tickets, bring a chair or blanket and sit on the terraced hills overlooking the outfield fence. While you’re in town, stop at the Peter J. McGovern Little League Museum and watch the Annual Grand Slam Parade.

ING New York City Marathon
Taking place in the beginning of November, and bringing together world-class runners from all around the globe, the NYC Marathon is an event like no other. You don’t need to pay for tickets, just show up anywhere along the race route and take in all the action. Tuchman recommends local street vendors for some of NYC’s finest cuisine. His favorite place to watch the race is where you can see the first runner coming off the 59th Street bridge onto the island of Manhattan.

To celebrate the race, not a particular runner, all the bars on 1st Avenue are a good bet. If you want to support a particular runner, head above 96th Street on 1st Avenue. These are the areas that mark the end of the race. During the week of the marathon a premier running expo takes place in Javits Convention Center. Sponsors and organizations distribute information about their products and the race — it’s a great place to get up close and personal. Tuchman says that because most streets are blocked off, walking and subways are the best means of transportation.

Baseball Hall of Fame Induction
There’s still time to plan a road trip around the 2016 Baseball Hall of Fame Induction Ceremonies.  A trip to Cooperstown, NY continues the tradition that started with Babe Ruth as the first inductee in 1936. The event is open to the public and free of charge, says Tuchman, so make sure you have an autograph book and pen in hand at all times, you never know when you’ll see one of your favorite players.

He also suggests bringing your own food and drink as lines are long and the food can get expensive. It’s an outdoor event, in the summer, which means chairs, blankets, sunscreen, binoculars (in case you didn’t get there early enough for choice seats) and maybe a rain jacket.Tuchman suggests the “Red Carpet Arrivals” event, which takes place the night before the ceremony, for the best up close and personal interaction with the players. There is no parking offered when the induction ceremony is taking place, so allow a lot of time for walking or taking the Cooperstown Trolley.

Wrigley Field
The second oldest ballpark in the major leagues today, Wrigley Field was built in 1914. Tuchman says to not worry about the seating, just enjoy the action. Cubs’ fans will tell you there’s not a bad seat in the house. If you want to get up close and personal, the Wrigley tradition is to stand on Waveland Avenue where you can battle to catch a home run hit out of the ballpark during batting practice.

Plan to visit between April and September, since the Cubs have a pretty long dry spell of landing a championship title. (Sorry, Cubs!) Wrigley Field is famous for its seventh inning stretch where Harry Caray once led the fans in a famous rendition of “Take Me Out to The Ballgame”. The tradition is alive and well today, with celebrities usually leading the fans. Be sure you stay for the whole nine innings, after the last out the chant “Go Cubs Go” fills the stadium as you exit.