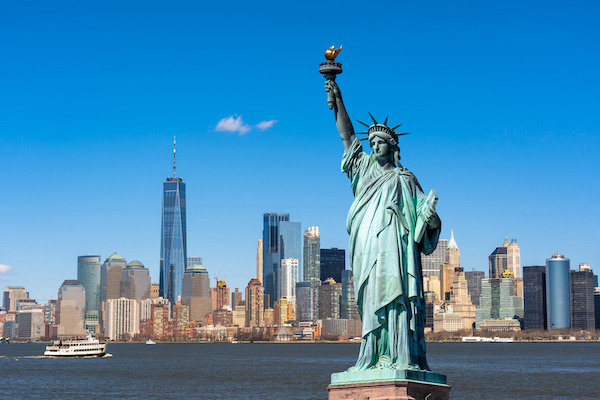 The Statue of Liberty stands above New York's harbor.

One of the reasons why New York City (NYC) is so popular around the world is because the city has been depicted in the media countless times. Thousands of films have been shot here ever since the movie industry started. Below is a list of 5 famous movie locations to visit in New York City that have been featured on screens.

The Statue of Liberty is a monument in New York Harbor. The statue was a gift from France to the United States, making the statue a global symbol of freedom. Its design was the work of French artist Frederic-Auguste Bartholdi, and it has become a symbol of freedom and liberty for millions of people.

The torch has also been depicted in the disaster movie, The Day After Tomorrow (2004), where it managed to withstand the frozen tidal waves that ravaged New York City in the film.

Another universally recognizable movie location in NYC is the Empire State Building. Your visit to New York City won’t be complete if you don’t get to climb up this 102-story skyscraper sitting in Midtown Manhattan and get a good view over the entire city. It has been one of the top filming locations for Hollywood movies since the 1930s and has been featured in more than 200 movies and productions.

Perhaps one of the most popular scenes shot here was the one in King Kong from the 1933 film. Other iconic movies that featured the Empire State Building include Sleepless in Seattle (1993), Elf (2003), Independence Day (1996), Oblivion (2013), Superman II (1980), and An Affair to Remember (1957) among others. Being one of the iconic buildings of the New York skyline, it is featured in pretty much any film that shows New York.

If you’re traveling by bus from Boston to NYC, then you’ll never miss the iconic 125-year-old Brooklyn Bridge. It’s one of the most popular bridges in the world. In recent years, Brooklyn Bridge has become a hotspot for different kinds of people and occasions.

When it comes to movies, the city’s most famous bridge is pretty much in every single movie set of a film shot in New York. It has been prominently featured in many movies such as Enchanted, I Am Legend, Cloverfield, Godzilla, Deep Impact, Spiderman, Fantastic Four, Sex and the City and many more.

Although it is colloquially known as Grand Central Station, this commuter rail terminal located in Midtown Manhattan is probably the most famous and stunning train station in the world. Grand Central houses 44 platforms (which is more than any station in the world). But what makes this terminal incredibly popular though is its beautiful, intricate interior design. Tourists from all around the world flock into the terminal just to see its meticulously crafted interior.

It’s also because of its beautiful architecture and interior design that the Grand Central Terminal has been featured in many Hollywood flicks which includes Avengers, Friends With Benefits, The Switch, Men In Black II, Just My Luck, Superman, The Taking of Pelham 123, and The Fisher King among others. 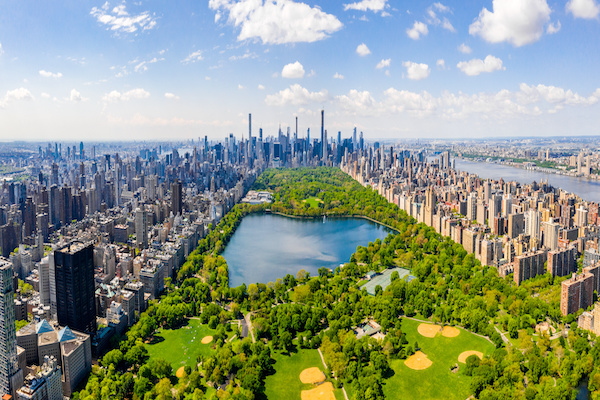 An aerial view of Central Park in Manhattan, New York. The park is surrounded by skyscrapers, and here you can see the Jacqueline Kennedy Onassis Reservoir in the center of the park.

Because of its immense size and amenities, Central Park has become a model for urban parks around the world. Not to mention that it is also the most filmed location in the world! From its beautiful walking paths, grassy lawns, sports fields, and that huge lake, the park has become an ideal outdoor filming location for any kind of movie in New York.

Perhaps one of the movies that best showcases what Central Park has to offer is the musical fantasy romantic comedy film, Enchanted. There’s a scene in the film where the protagonist (played by Amy Adams) goes through the park singing. The park has also been featured in other romantic comedy films such as Maid in Manhattan and When Harry Met Sally.

Regardless of the season, Central Park remains a top tourist destination and no New York trip won’t be complete if you don’t stop by here!

So, these are the most famous movie locations that you can visit while you’re in New York City! Visit these places if you want to relive the scenes from some of your favorite Hollywood blockbusters.