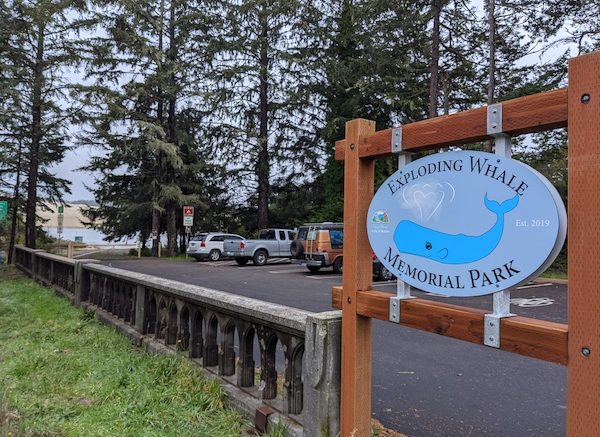 Sign for the Exploding Whale Park in Florence, Oregon. 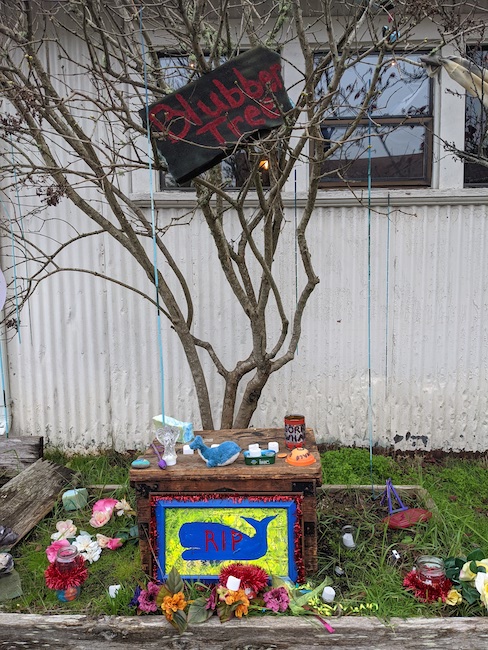 There’s never a bad day to be at the Oregon coast, even on the worst weather days. I know many people wouldn’t agree with me, but I love the wild, windy coast no matter what! Well, as long as I have someplace nice and warm to go back to.

But when there’s an event going on it’s a great time to be at the coast, especially when the weather turns out to be a fantastic warm late fall day. That was the scene when we went to Florence, Oregon, on November 13. We love the coast just about any time but this time in particular we were there because of the 51st Exploding Whale Memorial Celebration.

Now wait a minute! That may seem strange. Celebrating an exploding whale from 51 years ago? Yes, that’s one of the quirky things about Florence and it’s something that has turned into an annual remembrance with different parts of the community celebrating in different ways. Let me tell you the story. But first, be warned, there may be unpleasant descriptions ahead.

51 years ago a 45-foot, 8-ton sperm whale washed up on the Oregon coast in Florence. No one knew what to do with it because it was so big. As you can imagine the stench was unbearable so they wanted to dispose of it somehow. It couldn’t be pushed out to sea. It was too big to be buried. So someone within the state of Oregon Department of Transportation named George Thornton got the bright idea of using dynamite to break it up into smaller pieces which the seagulls would eat.

Now, I’ll give you just a minute to contemplate how that plan got off the drawing board. But it did. And in case you’re wondering why the highway department was in charge of the disposal, it dates back to a very old rule in which the Oregon coast was considered a highway because during low tides people would drive across the beach to get from town to town before there were actual roads built. But I digress.

George Thornton admitted he didn’t know how much dynamite to use. He settled on a half a ton (translation: a heckin’ lot) of dynamite and inserted it into the whale. Rather than the whale disintegrating into small bite-sized pieces, huge chunks of blubber exploded everywhere along with a fountain of blood. Picnicking families who had gathered to watch the, uh, disposal, were scared for their lives. Car windshields were broken by huge chunks of blubber. It didn’t go well. 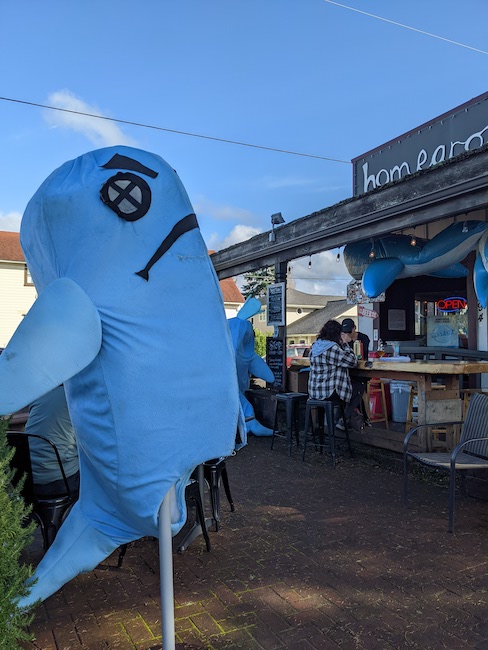 But . . . as stories like this often end, George got a promotion six months later. And, the exploding whale has turned into an annual celebration of a strange part of Florence’s history along with different promotions from businesses around town and points of interest celebrating Florence’s legendary exploding whale. We went to Homegrown Public House on November 13 to have a toast of Exploding Whale Hazy Pale Ale at 2pm in the whale’s honor. 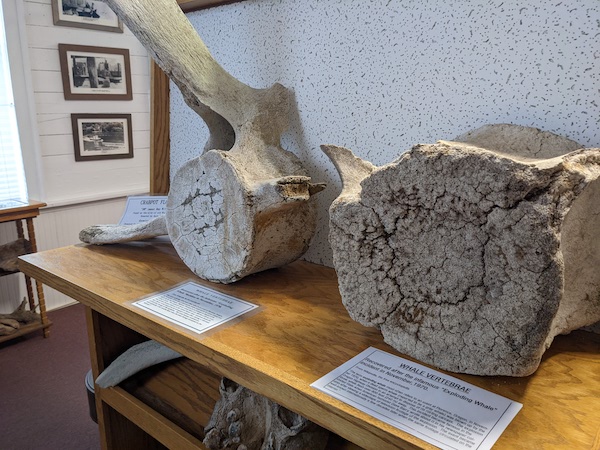 Whale vertebrae on display at the Siuslaw Pioneer Museum, recovered from the sperm whale that washed up on the beach and was exploded.

Outside of the public house was a public memorial where people could leave tokens and remembrances for the whale. A tree was decorated to look as if it had been hit with strips of blubber and there was an altar in remembrance of the whale. Right across the street in the Siuslaw Pioneer Museum was an installation of historical video from the time. We took an hour or so and walked through the pioneer museum to see quite a large collection of items including a reproduction of an old kitchen, sewing room, and child’s bedroom with toys, and many Native American artifacts from the area. 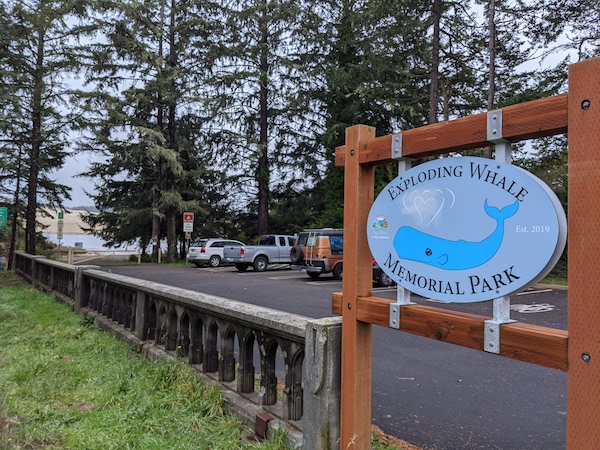 Sign for the Exploding Whale Park in Florence, Oregon.

Around the community were many different discounts, craft opportunities for kids, and exploding whale merchandise available at different retailers. There was a window display of historical news coverage at the Siuslaw News Building. We visited the Exploding Whale Memorial Park at 612 Rhododendron Drive. This park is actually named Exploding Whale Memorial Park, with a sign and everything. There are walking paths along the shore of the Siuslaw river, with excellent views of the dunes, along with grassy areas. it’s an easy way to enjoy being near the water without being covered in sand and it’s a good spot for a picnic on a nice day. Your young child might enjoy a photo opportunity in the oversized chair. 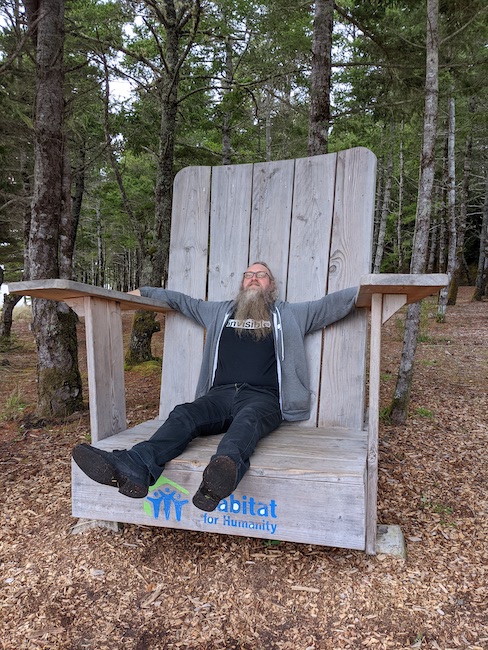 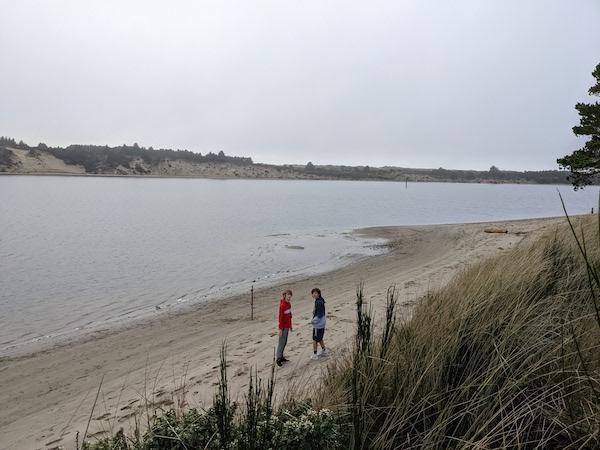 The Exploding Whale Park in Florence, Oregon, meanders along the Siuslaw River.

Geocaching in the Oregon Garden

Road Trip to the Original Geocache

Be the first to comment on "Road Trip To Florence, Oregon, For the Exploding Whale Memorial Celebration"