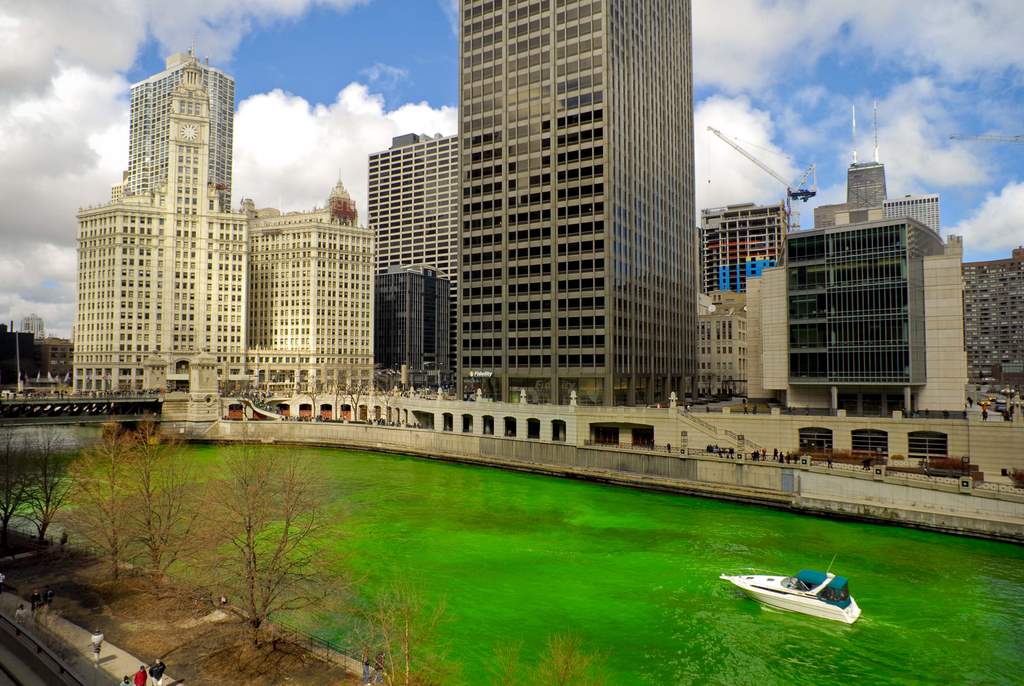 The first St. Patrick’s Day Parade was in New York, on lower Broadway, in 1762. A band of homesick Irish ex-patriots and Irish military serving with the British Army stationed in the American colonies in New York City comprised the parade. This was a time when the wearing of green was a sign of Irish pride and was banned in Ireland. The parade participants reveled in the freedom to speak Irish, wear the green, sing Irish songs and play the pipes to Irish tunes that were very meaningful to the Irish immigrants who had fled their homeland.

You’d never know that St. Patrick’s Day is technically a religious holiday. For families, it’s mostly a time to celebrate the Irish side of the family (or pretend like you have one) and enjoy the festivities. Do you go all out and dress in green from head to toe? Cook anything special? Green eggs and ham anyone? If you’re looking for the biggest family-friendly celebrations, here’s the master list. Note that we’ve also included some smaller celebrations at the end. Perfect if you’re not taking vacation to attend a mega parade. 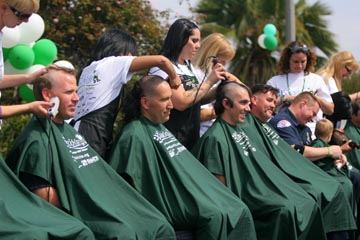 Consider celebrating St. Patrick’s Day by helping fight childhood cancer — and shaving your head. If your kids know any classmates with cancer it’s a great way to show they care by showing solidarity. Certainly it’s a bold step, but The St. Baldrick’s Foundation funds more in childhood cancer research grants than any other organization except the US government. Over $41 million to date. The majority of their events take place on St. Patrick’s Day and you can volunteer to be a shavee or just help with one of the more than 2,400 events. 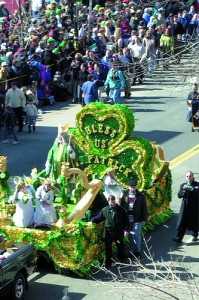 Boston St. Patrick’s Day Parade features dozens of marching bands and pipe bands from Ireland and North America, including local favorites like the Boston Police Gaelic Column, composed of Boston police officers. The Boston Irish Tourism Association has a complete list of all the parades in the area as well as complete information on all Irish activities. They also have a blog.

Boston’s Irish Heritage Trail is a self-guided, three-mile walking tour that covers 300 years of history as it takes you through Boston’s downtown, North End, Beacon Hill and Back Bay. Learn about famous politicians, artists, matriarchs and war heroes, part of a rich tradition of rebellion, leadership and triumph that personifies the Boston Irish.

In Boston there are plenty of authentic Irish pubs to visit. In fact, Boston has the most Irish pubs outside Dublin. Adjacent to Faneuil Hall Marketplace and the waterfront, The Black Rose is one of the most famous watering holes this side of Galway Bay. Don’t worry, they have a children’s menu! The menu includes mouthwatering corned beef and cabbage, aged Angus steak, Shepherd’s Pie, as well as New England seafood and a pint or two of perfectly-poured Guinness for frazzled parents. Traditional Irish breakfast is served every Saturday and Sunday. They also have live Irish entertainment nightly and on Saturday and Sunday afternoons.

Go “all green” this year in Chicago. The downtown St. Patrick’s Day Parade festivities begin at 10:45, March 13th, when you can watch the Chicago River get a dose of eco-friendly green dye (Michigan Ave. and Wacker Drive). The parade runs north along Columbus Drive, beginning at Balbo Drive at 12 p.m. and ending at Monroe Drive. The Northwest Side Irish Parade is also a great parade for families.

The best view of the city may be from the Chicago River itself! Shoreline Sightseeing offers two St. Patrick’s Day Cruises the day of the downtown parade, featuring traditional food and stories about Chicago’s Irish community. Cruises depart on Saturday, March 13 at 10 a.m. and 2 p.m. 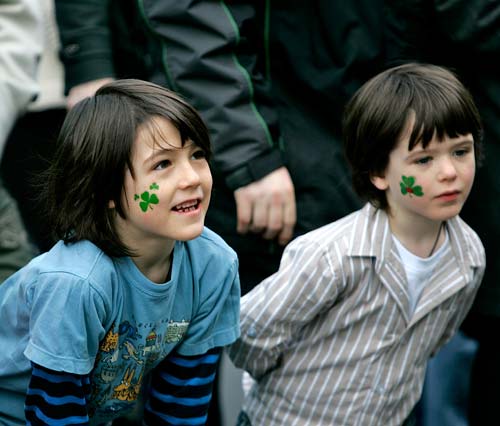 Get the inside scoop on the City’s rich Irish-American heritage from an enthusiastic, knowledgeable volunteer local during a free Chicago Greeter tour of the city. Eco-conscious travelers can explore the other side of “Green” Chicago with a Greeter visit to Chicago’s green buildings and park space. Book a Chicago Greeter visit online 7-10 days in advance.

Two Irish-owned restaurants are sure to please St. Patrick’s Day appetites: The Gage offers a contemporary American menu of Irish classics with a twist, while the Irish Oak features traditional St. Patrick’s Day pub fare and great Irish brews on tap. Visitors staying in the Loop don’t have to venture far to find some of Chicago’s best Irish pubs. Celtic Crossings, Fadó, and Emerald Loop are some downtown favorites. Continue on a “green” streak with dinner at Green Zebra, an upscale vegetarian restaurant that focuses on seasonal ingredients.

DUBLIN
National St. Patrick’s Festival highlight events include the St. Patricks Festival Treasure Hunt, a fireworks spectacular in the city of Limerick, Big Day Out on Merrion Square, free Irish language and culture events, the Festival Ceili on St. Patrick’s Eve, the parade and the finale on St. Patrick’s night. More than one million people attend the festival, and the fun is legendary. Celebrating St. Patrick’s Day in Dublin should be on your family’s list of “things to do before the kids grow up”.

The parade slogan, “On the streets of New York since 1762, the oldest, the biggest & best in the world” pretty much sums it up. The first parade took place 14 years before the Declaration of Independence was adopted. The New York City St. Patrick’s Day Parade is the largest parade in the world. 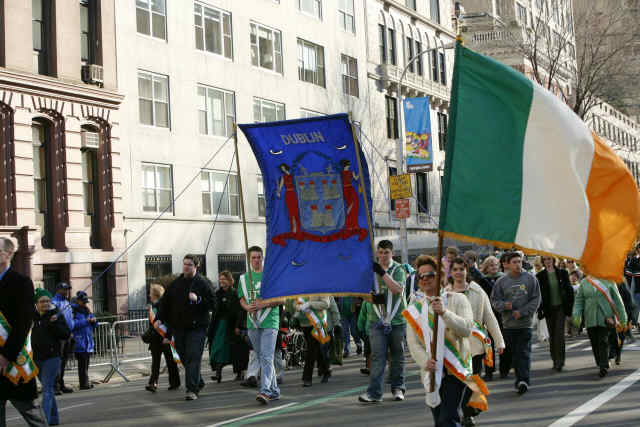 The Parade starts at 44th Street at 11 am and is held every March 17th except when March 17th falls on a Sunday; it is celebrated the day before, Saturday the 16th, because of religious observances. The parade marches up Fifth Avenue past St. Patrick’s Cathedral at 50th Street all the way up past the Metropolitan Museum of Art and American Irish Historical Society at 83rd Street to 86th Street, where the parade finishes around 4:30 – 5:00 pm. The parade remains true to its roots as a true marchers’ parade by not allowing floats or automobiles.

The Irish Arts Center hosts their annual St. Patrick’s Day Open Day, which is free to the public and great for kids. The traditional Open Music Seisiun is a spontaneous and informal musical performance by any and all performers who wish to participate. The family is welcome to participate and sing along. There are Irish dance lessons and craft workshops as well as Irish language and history classes for both adults and kids.

SAVANNAH, GEORGIA
Asked to list the biggest parades in the country, not many people list Savannah. But, the Savannah St. Patrick’s Day Parade is the second largest in the country! The parade attracts more than 250,000 people, who line the streets and squares of the Historic District. The water in almost every fountain in the city limits is dyed green (a tradition over 100 years old) to celebrate the city’s Irish heritage. Celebrations take place all day in City Market and on River Street. T

SPOKANE, WASHINGTON
Congressman Tom Foley has been one. So has NFL football quarterback Mark Rypien. They are both past Grand Marshalls of one of the most celebrated St. Patrick’s Day parades in the country held each year in Spokane, Washington. Tradition is huge here. The Angus Scott Pipe Band is always a tremendous hit at the parade and was founded by Bill Thomas.

The Seattle Seahawkers have one of the biggest and brightest floats among the 120-140 entries. Following the hype of the parade, the family-friendly party moves to the 100 acre Spokane Riverfront Park set in the heart of the city. Ride the century-old Looff hand-painted carrousel or jump on the Spokane Falls Skyride gondola and travel across Spokane Falls and back. Slide down the handle of the 26 foot long Radio Flyer Wagon, an interactive sculpture that is sure to take you back to your childhood. Feed trash to the garbage-eating goat sculpted by a local nun. Take in a movie at the IMAX Theater. Or stroll the many bridges leading across the Spokane River and connecting with the Centennial Trail, a paved pathway from Spokane to the Idaho border and beyond.

Other notable celebrations include: