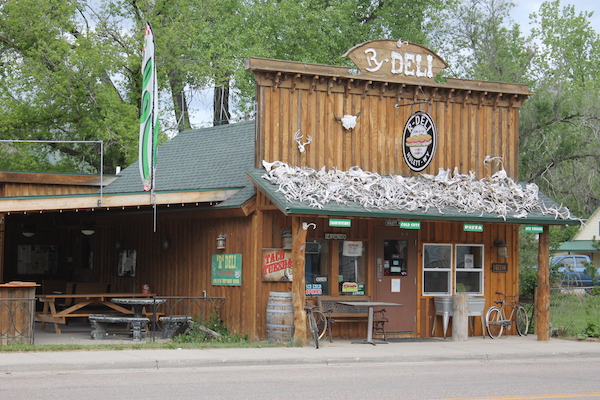 A road trip that occupied the better part of the past two days, I drove from Cody, Wyoming to Custer, South Dakota and made a U-turn at Mount Rushmore. With an overnight at the AmericInn in Belle Fourche, South Dakota I pointed my car in the direction of Yellowstone National Park and headed back in that direction. 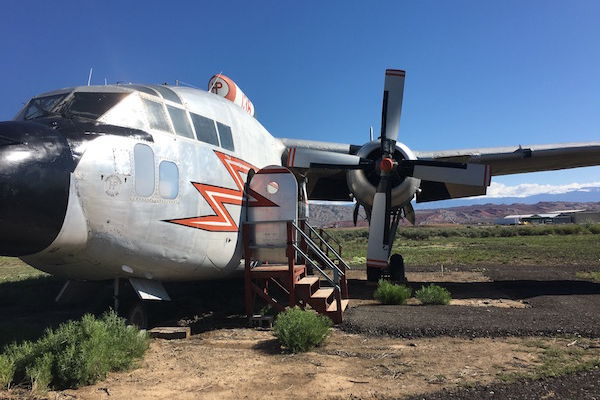 Museum of Flight and Aerial Firefighting near Greybull

Leaving Cody, I jumped on US 14 in the direction of Sheridan and Interstate 90. With a mug of coffee to sharpen the brain, the clouds in the distance slowly shifted to snow-peak mountains and I realized I was in for another mountain range—the Bighorn National Forest, which is separated from the Rockies by the Bighorn Basin. 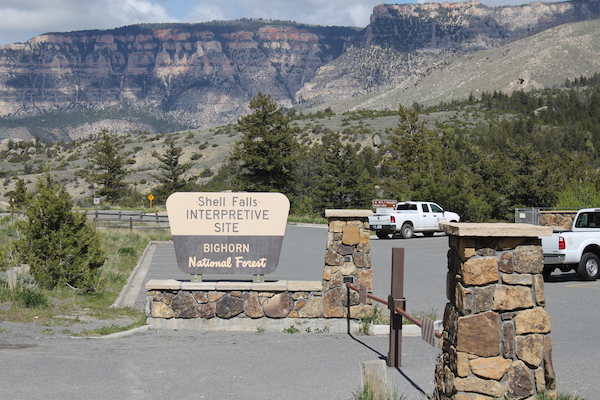 Pausing at a rest stop just outside of Greybull, the man behind the desk at the Museum of Flight and Aerial Firefighting suggested I take the northern route through the Bighorns, planning to stop at the Shell Falls Interpretive Center once I had gone past the town of Shell. (By the way, the Museum of Flight and Aerial Firefighting makes an interesting detour and only costs $2/person.) 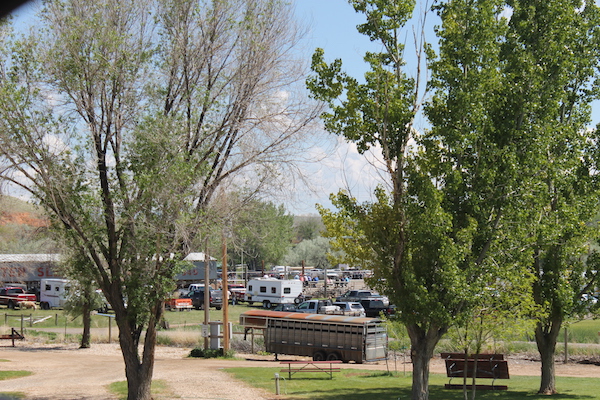 Driving the Bighorn Scenic Byway was perhaps the most unexpected and breathtaking drives on my trip so far. Already feeling tiny in my Ford Fiesta, I assumed an ant-like perspective from the valley floor. Crossing Granite Pass at 9033 feet, I spotted a young bull moose grazing in the tundra. 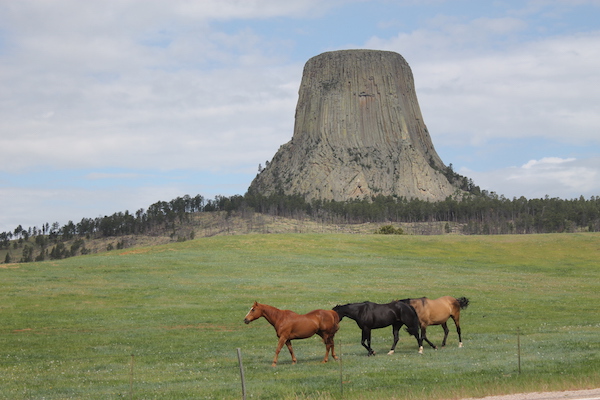 Devil’s Tower from a Distance

In the process of pulling over and switching camera lenses, I looked up to see he was charging my car at what I learned later was probably close to the species’ top speed of thirty miles per hour. In all, I’ve spotted a moose, marmot, bear, rattle snake, prairie dogs, elk, deer, bison, and countless birds and critters on this journey. But the moose gave me the biggest reminder not to mess with Mother Nature!

Safely on Interstate 90, I zoomed along with sagebrush and juniper-covered range lands as far as the eye can see. The vastness of it is exhausting on the eye, as I was craving a billboard or road sign just for something to occupy my mind. 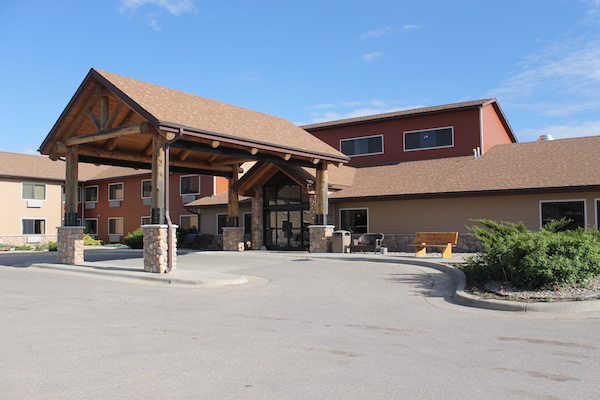 Just before exiting the state, near Morecroft, I spotted the familiar brown and white road sign reserved for America’s National Park System. A destination on my travel bucket list for some time, I detoured towards Devil’s Tower National Monument.

Rising up 867 feet from its base, the tower was formed during a series of volcanic eruptions over 50 million years ago. As the magma cooled it took the shape of massive phonolite columns that remain some of the largest and most impressive in the world.

If you go, make sure and walk the 1.3 mile paved path around the base of the tower, looking for rock climbers ascending and descending from two different sides of the formation. Fifty-three miles from Devil’s Tower is the AmericInn in Belle Fourche, South Dakota. 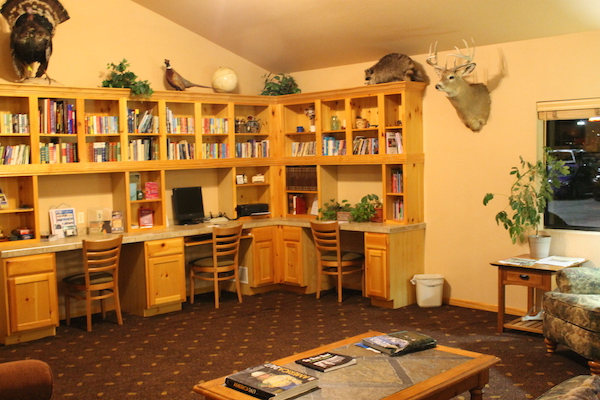 Books and Computers for Guests at the AmericInn in Belle Fourche, SD

Meticulously decorated in the spirit of the West and the American Cowboy, the hotel welcomes families with shelves of bookshelves and games. They’ve also added a a row of life jackets and tub of pool toys for kids to use during the highly-anticipated evening swim in the heated indoor pool. Parents to supervise from the nearby spa!

Using an omelet machine for the first time, I dined among honest-to-goodness cowboys with dusty boots and metal spurs. This experience put me in the mood for a day back in small-town Wyoming, with wide main streets and buildings decorated with antlers, wagon wheels, and false fronts common to Old Westerns and Louis L’Amour books. 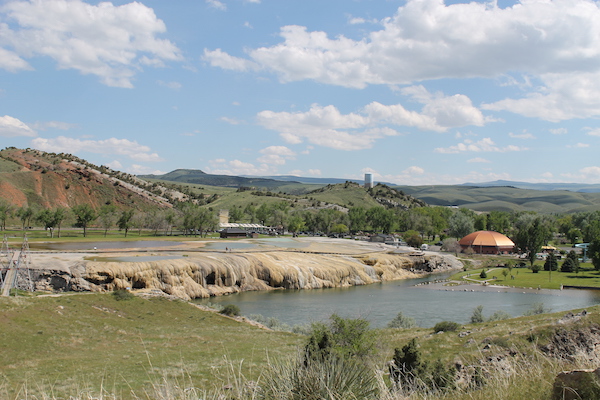 Returning to Cody by way of US 16 and the Powder River Pass (the slightly faster, but equally jaw-dropping, route through the Bighorns) I detoured to Thermopolis in search of Hot Springs State Park.

Home to Big Springs, one of the largest mineral hot springs in the world, people come from near and far to Thermopolis to soak in the healing mineral waters maintained at a perfect 104 degrees. Visitors have several different options for swimming in Thermopolis, from mineral spas at nearby hotels to the water slides and diving boards at Star Plunge.

I opted for the free indoor and outdoor soaking pools in the Visitor Information and State Bath House Building. If you are interested in visiting the nearby Legend Rock State Petroglyph Site, you will need to secure a key and make arrangements at this facility. I would like to come back and fully experience Thermopolois, but as it was, a dip in a hot spring was the perfect end to the day.

I’m writing this story as part of a spontaneous adventure exploring the sites and scenery around AmericInn locations in Idaho, Wyoming, and South Dakota. AmericInn is giving away ninety-two $200 vouchers as part of the Fill-Inn-to-Win game running through August 31. Read more information here: https://www.roadtripsforfamilies.com/americinn-fill-inn-win-game/ 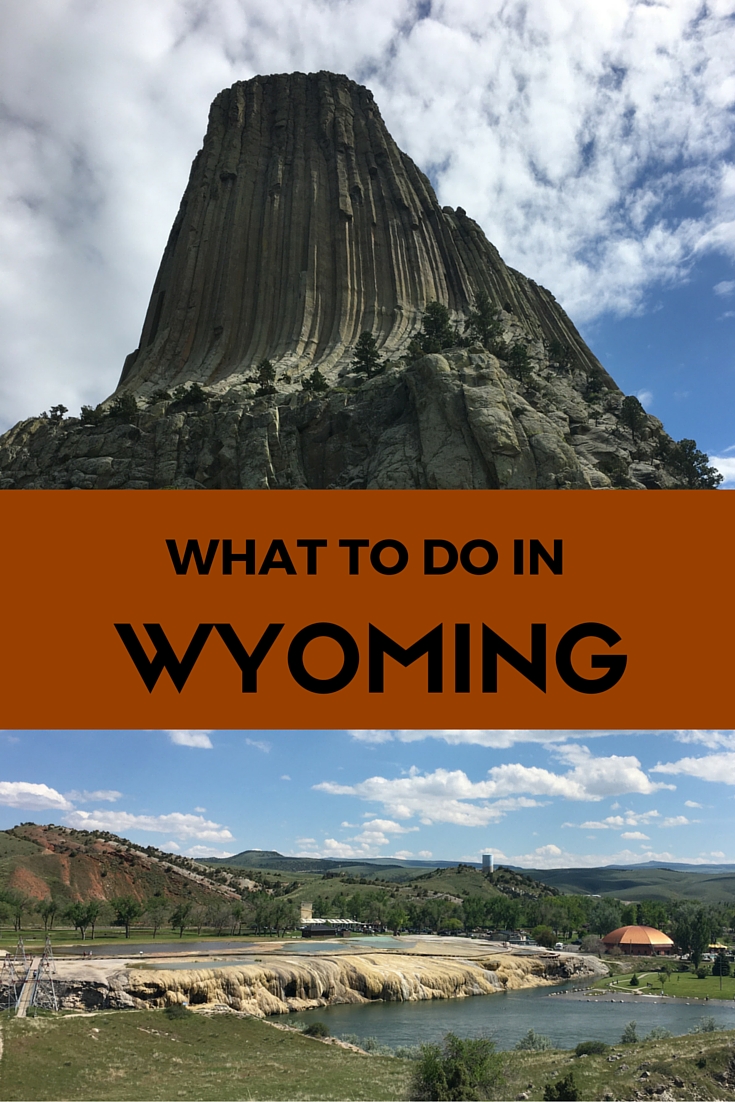 The Road to Yellowstone