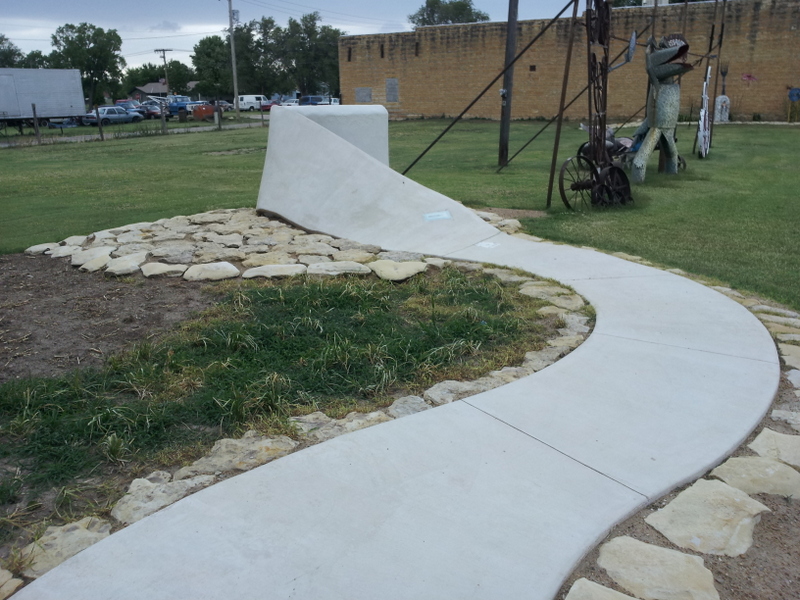 Family road trips are a procession from one public restroom to another. You judge your pit stops by how clean you believe the bathrooms to be, how long it will take everyone to use the potty, and how much it will cost to exit another tourist trap. Rest areas and parks take on a whole new meaning once you have kids. But in Lucas, Kansas, the artsiest little town we’ve ever seen, they take going to the bathroom to a whole new level.

A town of less than 500, (a lot closer to 400!) Lucas previously had no public restrooms. Given the number of road trip attractions in the town, it probably put quite a drain on the local businesses. The restrooms are located in Bowl Plaza, drive into town, you can’t miss it.

Making the list of the weirdest toilets in the world, the Lucas, KS public restroom takes bling to a whole new level. From putting the first flush up for bid on eBay (we hear it went for more than $100), to making the bathroom an actual tourist destination that’s not entirely driven by the need to go, you can’t help but admire the thought process. 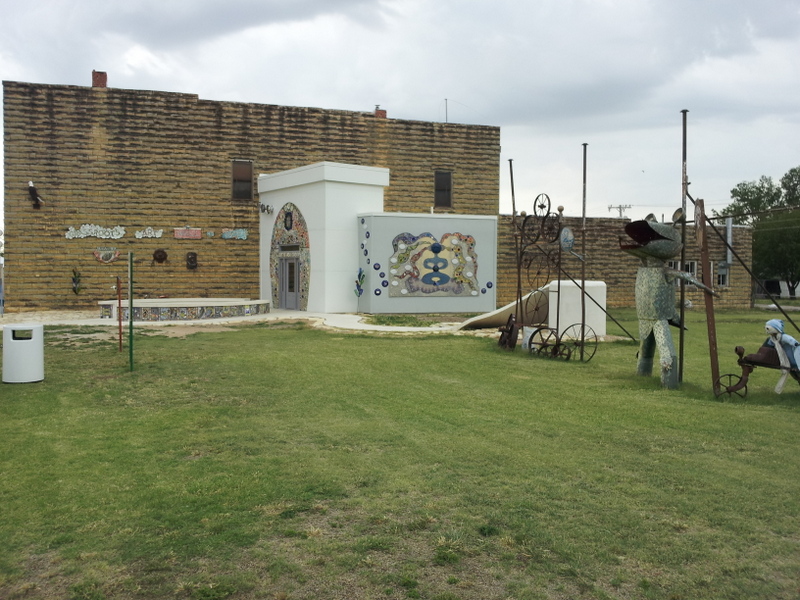 Our lid is always up!

And, the bathrooms are free. And clean.

For a town of between 400-500 people, raising the $100,000 to build the bathrooms had to have been a major undertaking. To celebrate that momentous movement, the town held a giant First Flush festival that featured a talent contest (we didn’t ask!), toilet-seat toss, replica of the Michelangelo “David” made from more than 200 rolls of TP, and yes, a lecture about bowel movements. Oh, there was some marching around in a plunger parade as well. 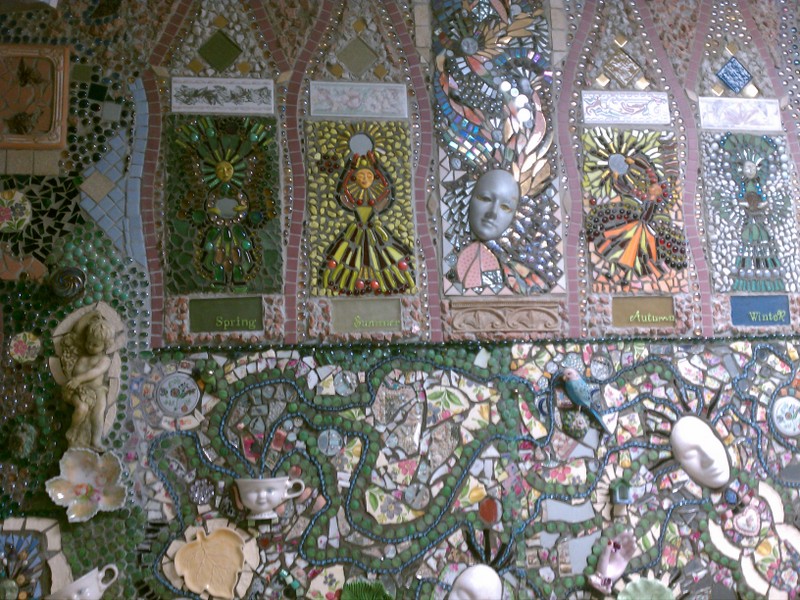 Mural in the women’s restroom in Lucas, KS

The World’s Most Artsy Public Toilets are actually amazingly beautiful. The women’s stalls, named “Porcelain Throne” and “Oval Office” are decorated with found objects that form intricate murals and elaborate, interwoven themes. The rooms are remarkably hard to photograph, so you’ll have to try some fun poses, making our kids call the bathrooms “the home of the weirdest things we’ve seen mom and dad to to take a picture”. We also decided we didn’t want to be in charge of cleaning all the little pieces that make up the murals. 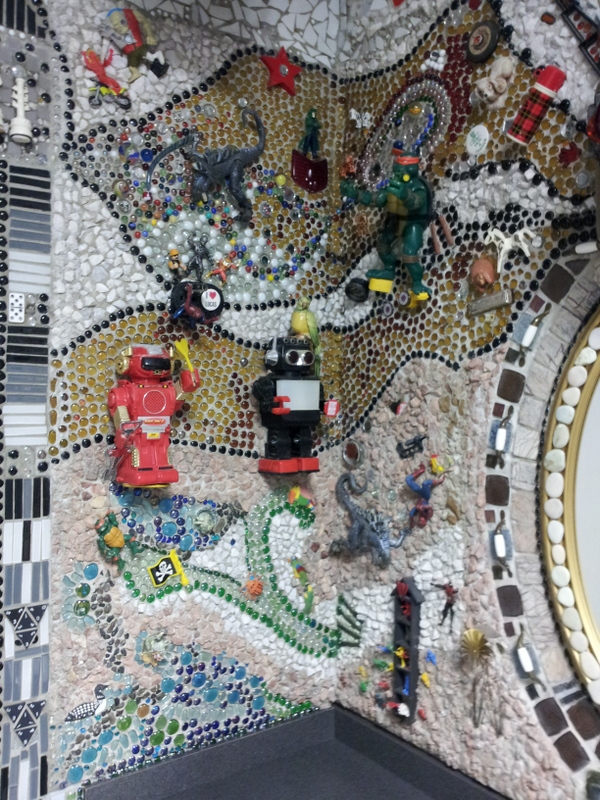 “Porcelain Bus” and “Superbowl”, the men’s stalls, are more playful. The murals are made from toy cars and other character toys — we dare the men in your family to try to make this a “quick stop”.

The park near the toilets is a great place to run around, and has some fun public art as well. We ate our picnic here, which the kids thought was “gross”. Parking anywhere near the central flushing station will also afford easy walking to the rest of the town’s downtown attractions — and it’s only a few blocks to The Garden of Eden. We didn’t see a geocache at the toilets (yet), but hopefully someone does a really great-bathroom themed one with lots of potty humor. 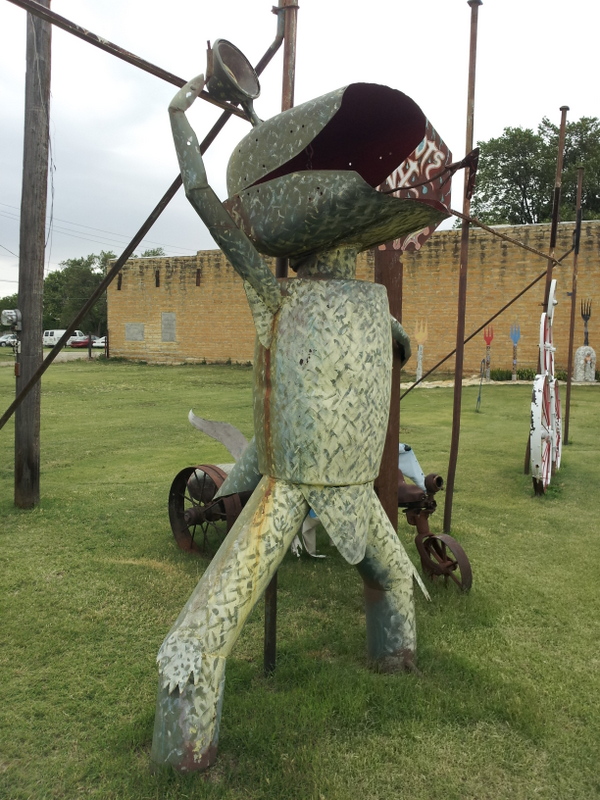 Our nomination for “Best place to place a cache” near the public bathrooms in Lucas, KS

Life in the Fast Lane, Google Fiber in Kansas City

Kansas, Off The Beaten Path, West