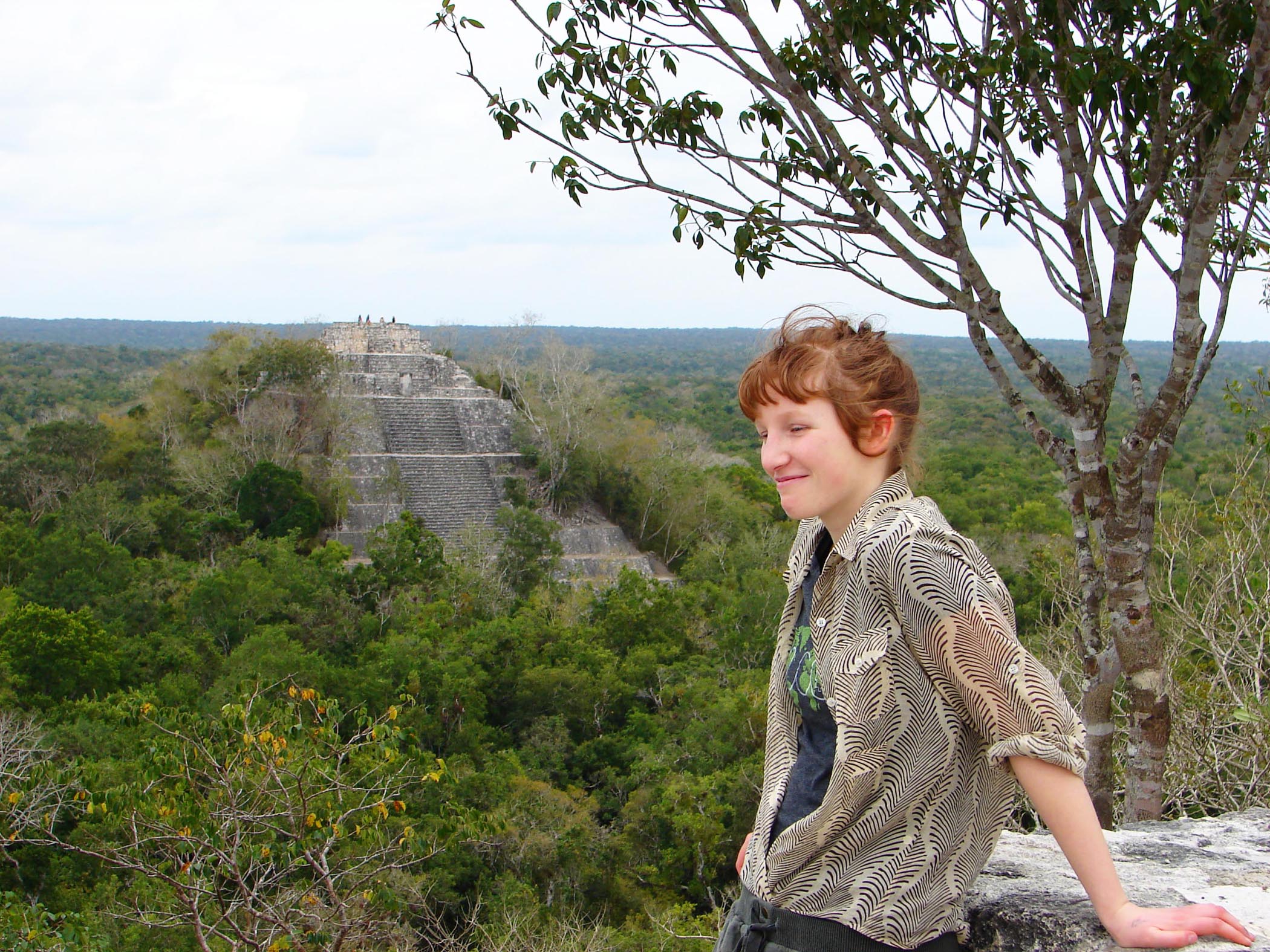 On Top of the World at Calakmul

Our guest post this week is one of our favorites in a really long time. That’s because it’s written by the second generation of travel writers in the Voelkel family, Charlotte Voelkel. You may know her parents, Jon and Pamela Voelkel, from their book, The Jaguar Stones, Book Two, The End of the World Club. The Voelkel family is dedicated to bringing Maya culture to life, as evidenced by some of their adventures. Read on…

My parents write books about the Maya, so for February break they decided to take me, my brother (aged 17) and my little sister (aged eight) on a research trip down to Mexico. This is my blog of the trip… 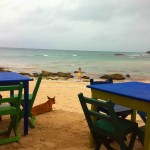 The Beach at Zamas

It was pouring with rain when we landed in Cancun. After getting the rental car (an ordeal which took the good part of an hour) we drove south about two hours to a place called Zamas, on the coast at Tulum.

It had stopped raining by then and we were happy to peel off our traveling clothes and don the much anticipated shorts and t-shirts. After a delicious fresh fishy dinner on the beach, we headed back to the room and finished the night Swiss Family Robinson style, reading, writing, and drawing under mosquito nets in our thatched hut on stilts. 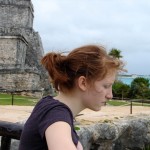 Early next morning we headed off to the Maya ruins of Tulum, hoping to beat the crowds. Tulum is one of my favorite sites as it is right on the magnificently blue ocean and looks picturesque and not entirely inhospitable. Afterwards we went back to the hotel for breakfast. After we’d devoured fruit and omelettes and been sufficiently chased by a local dog on the beach, we got on our way.

After hours of driving we stopped at a site called Chacchoben, where it helpfully began pouring with rain again. We were the only visitors. After photographing all the trees and my parents in front of all the pyramids, we tried to buy ice cream from the custodian, but he told us the fridge was locked till Tuesday when a cruise ship would be visiting. 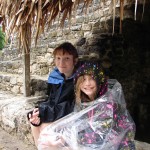 We found almond magnums (mmm) at a gas station and drove to our next hotel, Puerta de Calakmul. We went to our sleeping hut (I say hut, but screen porch would be more accurate) and discovered that the electricity was out. Lit by three tea lights, we gathered the essentials, and headed to the dining hut where they had an emergency generator and, to my tweeting mother’s delight, wifi!  After sending off a math paper, I had cream of carrot soup, which I promise tastes a lot better than it sounds. We attempted to stretch out our meal as much as possible in order to put off returning to our dear dark screen porch. As we sighed at our inevitable darkness, the electricity came on! 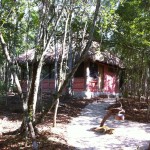 Worst night’s sleep of my life. The bed was rock hard and the jungle was unexpectedly cold. Also, a travel tip to keep in mind would be to try not to travel with sickly parents – our room was snore and cough central. After breakfast we went off to the ruins of Calakmul. It is located in a biosphere reserve which means that it takes an hour of driving down a bumpy, winding road through the rainforest to get there. Some of us could not handle it, and my sister puked. 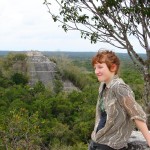 On Top of the World at Calakmul

The drive felt really long after that, but eventually we arrived to a welcoming committee of wild turkeys. We went into the site and climbed some very tall pyramids, some of the tallest in the Yucatan. Later we were taken to a restricted location in the forest where there’s a very deep cave at the bottom of a very deep cenote (sinkhole). Inside that cave live millions of bats that stream out at dusk in a massive twisting cyclone. It was the most incredible thing I have ever seen. As they come out you get hit with an wave of sulfur. 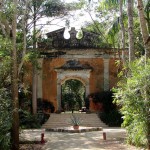 Archway at the Hacienda

This morning we had to wake up at six o’clock to take a nature walk. We saw all sorts of plants and animals such as orchids, strangler figs, crocodiles, brown jays, woodpeckers, and parrots. We all tasted live termites which supposedly have 500 calories to the handful. This makes them the ultimate survival food, plus if you put an old termite’s nest on a fire it will keep the mosquitos away. Though certainly not my favorite thing, they tasted sort of peppery and woody. 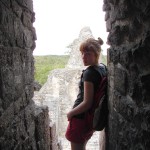 Trying not to plummet at Xpujil

We also visited an abandoned papaya plantation, a hot spot for toucans. We then went back to the hotel for breakfast and headed off to, surprise surprise, more Maya sites. One (Xpujil) had a hidden staircase. It was coffin-like, claustrophobically tight and, once at the top, it dramatically dropped off in a terrifying plummet. 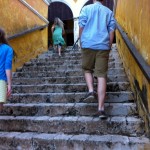 The main attractions of the second site (Becan) were the moat, the archways and a massive mask protected by a temperature-controlled casing.

Afterward we went back to the hotel and enjoyed one more night in our dear old screen porch. Of course it wouldn’t be quite right if everything was all comfy cosy – don’t worry, the shower was an icy dribble of water. Mmmm, jungle comfort. 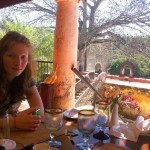 Breakfast at the Hacienda

Treat time. Today we checked into Hacienda Uayamon, a former hennequin factory outside Campeche. It’s totally gorgeous, lush with plants and color. The old ruins have been incorporated into the design making a beautiful marriage of old and new. That night at dinner, we felt like the lords of the manor. As lizards squeaked in the rafters above us, bats swooped in and circled over our heads. A simply magical night. The food was incredible from the carpaccio for starters, to the orange creme brulee for dessert. The only strange thing was that so many dishes – including the breakfast menu – contained the unappetizing sounding baby shark. 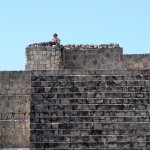 Enjoying the View at Edzna

With much regret, we left the Hacienda and continued on our journey. First stop was a site called Edzna. It was incredibly hot (finally!) and we tromped up and down a plethora of low stepped temples. My parents wanted to visit one more site before the next hotel. “It’s on the way,” they said. 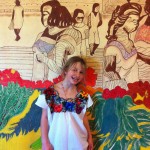 My Sister in a Huipil at Casa Hamaca

Unfortunately Santa Rosa Xtampak was incredibly hard to find and both our maps were wrong, so it took forever on hilly roads like roller coasters. When we finally got there, we were all terrified by an old man who appeared out of the jungle brandishing a machete at us. (He turned out to be friendly.) Again our maps let us down and it took hours longer than expected to get to our next destination, Casa Hamaca in Valladolid. Only an audiobook of Bill Bryson’s “At Home” made the drive bearable. But Casa Hamaca is very cool, run by a guy who knows a lot about the Maya, and the town of Valladolid is beautiful. 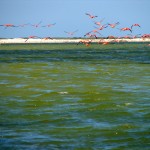 We drove to the coast at Rio Lagartos and rented a boat to go see the birds on the salt flats.  It took an hour of winds whipping our faces, but it was worth it. We saw all sorts of wildlife, including hundreds of bright orange flamingos, herons, pelicans, cormorants, eagles, even a huge crocodile. It was certainly a sight to see.

That night my parents had to unexpectedly give a talk about their book, so we had a most unMexican dinner from Domino’s. I spent the night eating pizza and writing an essay for school. 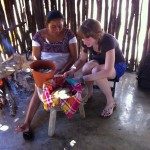 After breakfast we set out to visit a Maya woman whom we first met a few years ago. Sofi lives at the end of a dirt road on the edge of her village. Her house includes a thatched hut with a concrete floor for cooking and a single floored cement house with two rooms, one large and one tiny. There is next to nothing in this room except for the family’s hammocks and a small bench holding bits and bobs. Sofi is married with seven children, four of whom are living at home. My parents interviewed Sofi and her oldest son about their lives. After the interview we went to the local elementary school. The moment we walked in, kids gawked at the strange tall family who’d come to visit. Lessons were in Spanish and Yucatec Maya. The principal said it was his aim to teach proper elocution and etiquette. After taking pictures and talking with the kids, we went back to Sofi’s house for chicken stew, spicy radish salsa and homemade tortillas. I tried to help her make them, but sometimes its just better to let the professional handle it…

From here we went to visit a guy my parents had met the previous night. He’d got sick of the consumerism in America so he’d moved to a traditional Maya village. His house was easily recognized, as it had a five story tower he’d built himself, the inside of which was almost entirely mosaic. The tower also includes a solar water heater, observation deck, herbal plant garden, circular windows, spiral staircases, and other impressive additions. 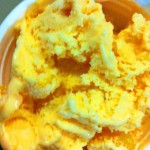 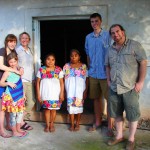 The two Maya sisters next door had kindly made a meal for us of be’ek kik’en (beans and pork) and a scrambled egg and sausage dish. Like Sofi, these women who live with their 87 year old father, had a cooking hut and a cement house where they hang their hammocks. They also had other huts in the garden for animals such as pigs, baby chicks, and stingless native bees that lived in logs instead of hives. The two ladies were weavers, making hammocks and bags. Like most of the older women we met, they wore the traditional huipil, a white shift dress with floral embroidery.  Inside every house in the village was an altar. Each household had been assigned a saint – these ladies had the Divino Nino, as well as the Virgin of Guadelupe, patron saint of Mexico. We strolled around the village meeting more people and also visiting the village church, which was garlanded with pink foam flowers.  We left the village knowing way more about how the modern Maya live. I’m not sure I could live that way.

One the way back to Valladolid, we stopped for ice cream and tried, for the first and probably last time, maize ice cream. It really, really tastes of corn. That’s the only way to describe it.

This morning we walked to the local cenote, which was absolutely beautiful. Then we drove back to Cancun airport and were back in the ice and snow before we knew it.