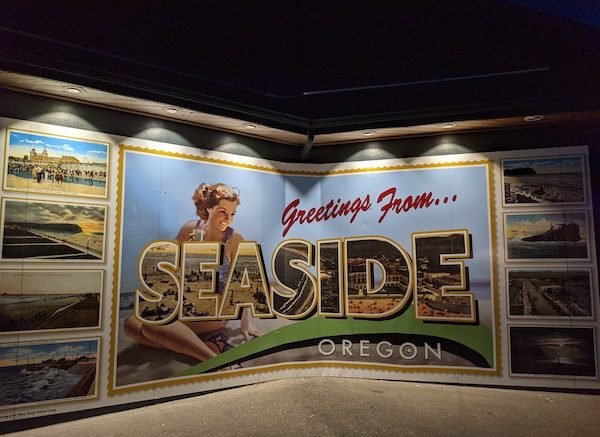 The Oregon Coast in summertime is a magical place to be. We’ve written about destinations up and down the coast, from Newport to Neskowin and Coos Bay in the south to the 50 miles of the Central Coast. One great thing about the Oregon Coast is that it is usually much cooler than inland, so when weather in the central valley is in the 90s (or even higher, as it has increasingly become) the coast can be a comfortable 20 or even 30 degrees cooler. Such was the case on our recent visit to Seaside in late July.

The downside to this all is that the Oregon Coast in summer is usually quite busy. That proved to be the case for us. This was partly due to the fact that Seaside is a popular destination for folks from Portland who want to escape the city and it was especially hot that weekend (Seaside was in the 60s while Portland sweltered in the mid-90s), and this particular time frame is high summer, which is the busiest time on the Oregon Coast in general. 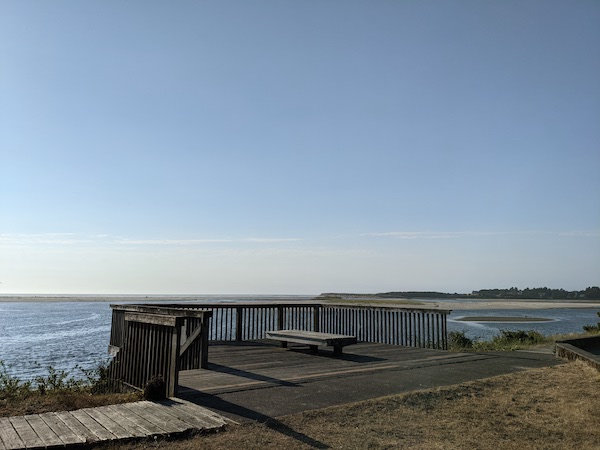 Seaside has ocean and an estuary where clamming is easy.

We went without kids on this particular trip, but there is so much to do in Seaside that people with kids of all ages can enjoy. We were kind of on a brewery kick, so we visited Seaside Brewery in Seaside, Pelican Brewery in Cannon Beach (10 miles to the south), McMenamins in Gearheart (2.5 miles to the north), and Fort George Brewery in Astoria, Oregon (17 miles north). Each brewery was standing room only, filled to capacity, short-staffed, and with tables on a first-come first-served basis. Luckily, Seaside and Pelican allow people to hang out in the parking lot with beers, so we were able to get a beverage, but we were out of luck on getting a table for food. McMenamins had tables, but they weren’t doing table service so we had to wait in line for about 20 minutes to order. We got to Seaside Brewery an hour before they closed and had no problems there. Bottom line: These places don’t take reservations, so expect any destination brewery, and any restaurant in general for that matter, to be packed. Expect a wait and expect to fight for a table. 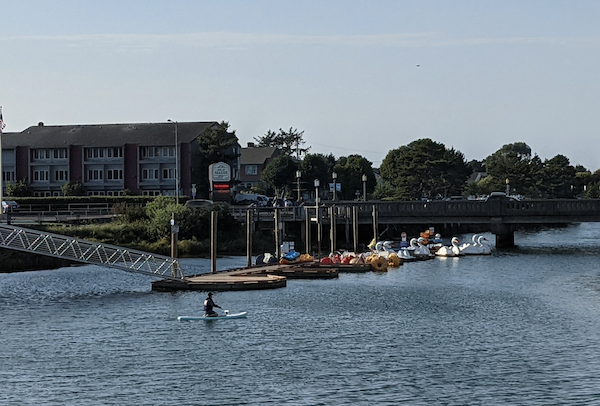 Paddleboarding or kayaking is popular on the Necanicum River, which flows right through the city.

Seaside’s “Prom” gives the town the feel of an old-fashioned midway, with a boardwalk along the beach, the Funland arcade and other carnival games, Pronto Pups, a mix of restaurants, and the Seaside Aquarium, one of the oldest aquariums on the West Coast. 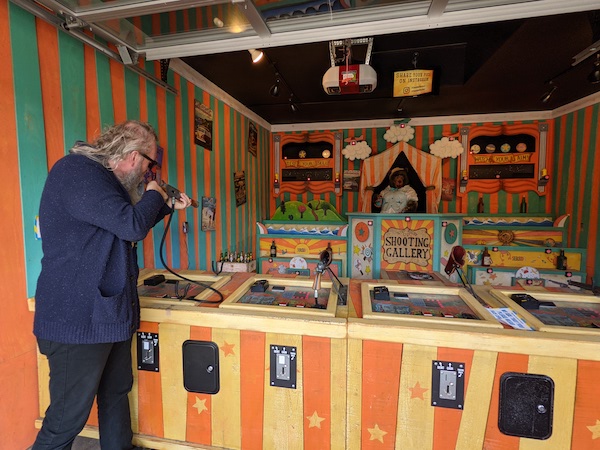 Midway games on the Seaside Prom.

As you might guess from the above section, parking was a challenge, even on a Tuesday afternoon. Go with your patience and be willing to walk a few blocks. Once you get down to the beach area, you’ll be rewarded. The boardwalk area is lined with hotels, all with great views. The beach is busy, but there are things like swings for young kids, and lots of opportunities for kite flying. On the days that we were there, someone was carving a sandcastle of a soldier, and someone was blowing giant bubbles. 2021 happens to be the centennial anniversary of the Seaside Prom, and the town is giving away prizes to folks who visit the visitor’s bureau. 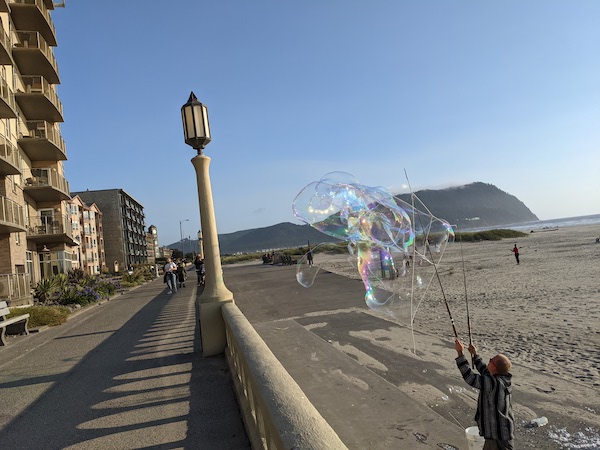 Bubbles on the Seaside Promenade, a boardwalk that goes right along the water.

The aquarium is literally right on the walkway and just steps away from the main entrance. It’s on the small side with just one large room and a separate room with seals that you can feed, but the tanks were interesting and active. There is a touch table, an octopus in an open tank, and lots of cool exhibits like sea stars and sea cucumbers. Feeding the seals is an experience. For only $1 per tray you get some fish you can toss into their tank, and these seals are primed for a performance, especially Greta, a seal who claps to get your attention!

Young kids will love the Seaside Carousel Mall, located two blocks from the Pacific Ocean. It’s built around a replica of a classic carousel that works, and is surrounded by shops with gifts, clothing, souvenirs, candy, ice cream, coffees and other treats.

Dine With a View

We ended up walking along the boardwalk near dinner time. I stopped in and asked at the aquarium for suggestions on a restaurant with a view. We got two recommendations, and we visited them both — although one didn’t have a view. The one with a great view just steps off the boardwalk is Maggie’s On The Prom. This wouldn’t be my top choice for a family meal as the menu was $20 and up for most plates, but the view can’t be beat. We got a round of drinks and a charcuterie platter as an appetizer, then made our way to the family friendly Norma’s. 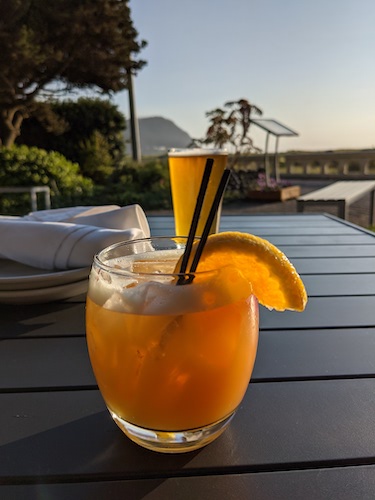 A beer and a Beachcomber cocktail at Maggie’s On The Prom helped us take advantage of the great view. 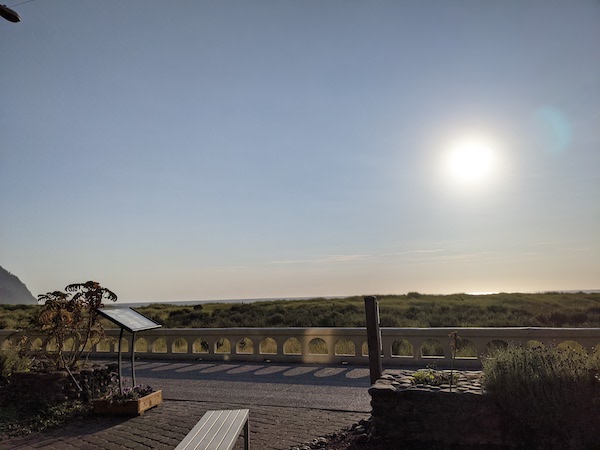 View from an outside table at Maggie’s On The Prom.

Norma’s is a seafood restaurant, but also has burgers, pastas, and sandwiches that anyone can enjoy. It looks like a fancy place from the outside, but inside is more of a diner feel. The food has received accolades for the freshest and best seafood for years, and we can’t argue. We were in the mood for seafood so we split the Captain’s Platter, which came with salmon, prawns, halibut, oysters, calamari, and scallops, which you can get grilled, fried, or sauteed. We chose to get ours with a baked potato and a cup of clam chowder — it was a LOT of food which we would have had a hard time finishing even if we hadn’t already had an appetizer. As a bonus, the clam chowder was fantastic, and if we had any room left, the desserts we saw being delivered to another table looked amazing (mocha mud pies, brownie sundae with loads of whipped cream, cobbler, and more). 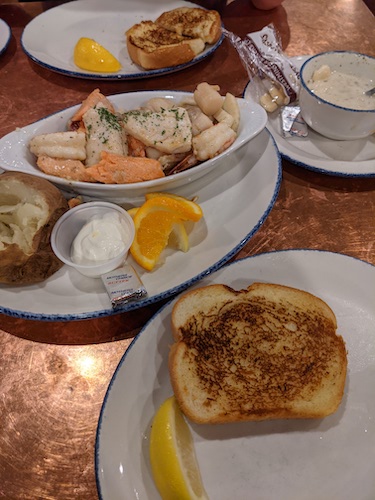 The seafood Captain’s Platter at Norma’s.

Soak Up The History

Seaside and the neighboring town of Astoria have a lot of history behind them. Astoria, as you might know, is where the movie The Goonies was filmed, and that continues to be a tourist draw. Before European settlement, the land here was home to the Clatsop and Chinook tribes. The expedition of Meriwether Lewis and William Clark reached the Pacific Ocean in November 1805, and they set up camp just to the north by the mouth of the Columbia River. While there, they had run out of salt, so they set up a place to boil ocean water to harvest salt. Today, you can visit a re-creation of the salt works on the exact location of the original. 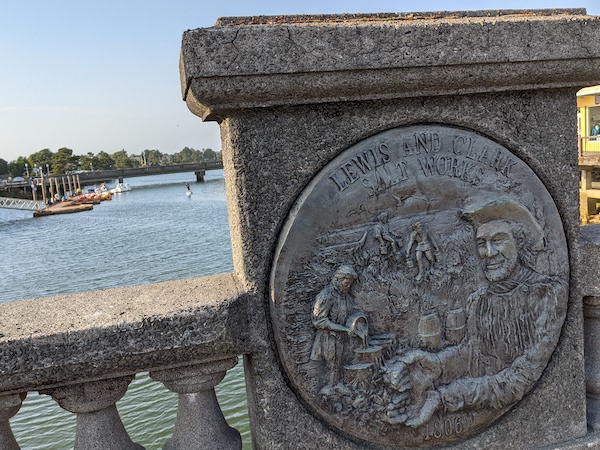 Lewis and Clark didn’t claim any land for the United States in 1805, but John Jacob Astor, who Astoria is named for, did in 1811. Astor and his crew established a fur-trading outpost at the mouth of the Columbia, and Astoria became the first permanent U.S. settlement west of the Rocky Mountains.