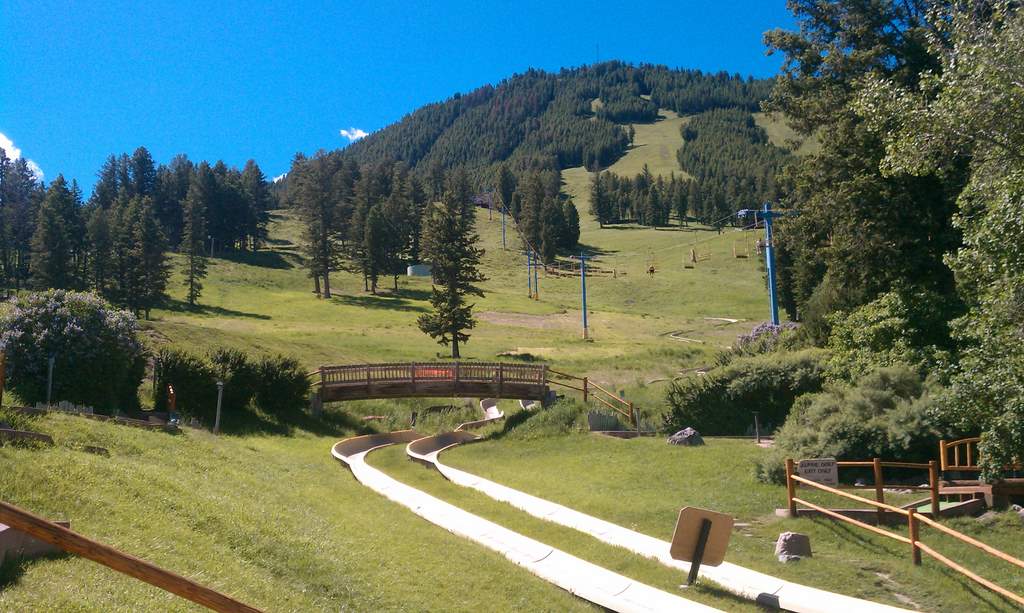 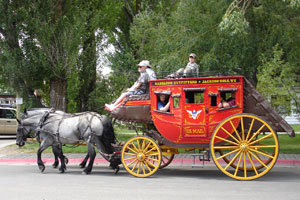 What’s not to like about the 4th of July? Fireworks and watermelon, parades and picnics. This year we stopped to celebrate Independence Day in Jackson Hole, Wyoming. Jackson is one of those towns that is so unique, nothing else is quite the same. It’s a resort town, no doubt, but it’s also Wyoming so the pretentious level is way down. It’s a town that’s accepting, welcoming even, to those who want to play cowboy for a few days. And, their celebration of America’s independence doesn’t leave anything out.

If you get antsy to explore the area, the Grand Teton National Park beckons just a short drive away. With all of the modern conveniences of city life, Jackson Hole manages to convey with attitude alone that you’re in cowboy country. Jackson has great parties no matter what time of year you visit, and the 4th of July is no exception.

We started our cowboy-themed 4th with dinner at the Bar T 5 Covered Wagon Cookout the night before. After driving into Jackson through Yellowstone we were not only hungry but in the cowboy frame of mind. Start with boarding a covered wagon and traveling to a creek outside of town. Those wagons look a whole lot bigger (and comfortable) before you actually ride in one. Talking about what it would have been like to be a pioneer and traveling for months, with all your possessions, gave us plenty to think about. No spoilers here, but the ride is very well done and you’ll have a great time! Arrive in camp and the Dutch Oven opens up to all you can eat cowboy grub followed by entertainment and a ride back to town. Kids will love this, so be sure to make reservations as the wagons fill up quickly during peak seasons.

We were lucky enough to stay at the Snow King Resort, right at the base of Snow King Mountain. Which is lucky because Fire in the Hole (as they call the fireworks) are launched from Snow King Mountain. We had not only one of the best seats in town, we didn’t have to fight traffic to drive home afterwards!

The whole region comes into town for the fireworks (allow extra time for traffic) and the best way to enjoy them is to just find a parking space in the morning and spend the day downtown. There’s plenty to do, and plenty of peaceful picnic spots if you want to pack lunch or dinner. 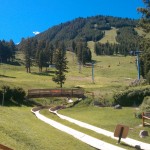 In the morning, we took time to enjoy the Alpine Slide, Scenic Chairlift and Alpine Mini Golf at the Snow King. The Alpine Slide, which winds down 2500 feet of woods and wildflowers was voted the favorite by everyone. You control your own speed (don’t worry, no special skills required!) and after a timid first ride, the family racing ensued. We took advantage of the early morning without lines to minimize the wait time before moving to some mini golf and a relaxing chairlift for some scenery. We wanted to take a trail ride (there’s no more iconic destination to take see from the back of a horse than Jackson Hole, right?) but had to head out for the parade.

Our antics on the Alpine Slide made us miss the Jackson Hole Jaycees Pancake Breakfast. Since 1977, the Jaycees have been serving eggs, sausage and pancakes on Center Street. All proceeds help the Jaycees fund projects like the community fireworks and scholarships for kids in the area. The Howdy Pardners’ Fourth of July Parade was hometown and festive, just like a good 4th of July parade should be. After the parade there are almost endless options for families. After the parade, we checked out the kid’s games at St. John’s Episcopal Church. Take your pick from the balloon toss, three-legged race, infant crawl, fish pond, watermelon eating contest, tug-of-war, football toss, and more. There is a suggested donation of $10 per child. We also saw games and activities in several areas downtown, there’s no lack of things to do.

But our destination was the National Elk Refuge. They have a Junior Blue Goose Ranger Program and the whole family learned a lot about elk in the process of filling out the paperwork and visiting all the exhibits. The refuge was built because the town of Jackson Hole and other settlement of areas around the West took winter grazing land from the elk. They stay on the refuge for approximately six months each winter. If you visit Jackson in the winter, be sure to visit the refuge and take a tour, sleigh ride or other activity. We also did some geocaching in the very near vicinity (no hints!) and vowed to come back some year in May for Elkfest. 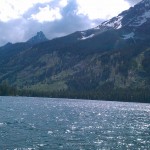 Then we took a drive and headed to Jenny Lake in Grand Teton National Park. Home of another Junior Ranger program, GTNP can be largely overlooked by families rushing through the area on the way to Yellowstone. But, the park has some of the most impressive geology, history and views in the area. We hiked around the lake and took the new Scenic Cruise of the lake. An impromptu thunderstorm had everyone on the cruise huddled in blankets. Seeing everyone obviously cold, the boat captain asked if we wanted to turn around. Unanimously, everyone said, “NO! It’s over 100 degrees at home. We’re sending Facebook pictures right now.”

We opted for dinner at the Silver Dollar Bar & Grill, located in the historic Wort Hotel, instead of Music in the Hole, a free outdoor concert put on by the Grand Teton Music Festival. It was a tough decision, but we wanted to check out all the silver dollars and learn about the hotel. And, we had to be to the Jackson Hole Rodeo by 8:00 pm. If you’re a hard core rodeo lover, you’ll enjoy seeing a local rodeo, the future of rodeo (the kids are awesome!) and the hometown atmosphere. If you’re new to rodeo you’ll love all that plus the opportunity to learn more about the rodeo.

And finally, at sundown, which happens pretty late in this area of the country, the fireworks! There’s something so big and impressive about laying on the grass watching the fireworks explode with the mountain as a backdrop. Jackson Hole might be a small town but their fireworks rival any display in the country. The grand finale echoed off the mountains around us and left the crowd cheering and satisfied. As we took the short walk to our rooms we felt pampered and happy that we didn’t have to face the traffic before hitting the pillows in the Snow King. With one of our very favorite 4th of July’s ever behind us, we prepared to hit the road the next day for West Yellowstone. We’re seriously considering coming back next year for the 4th!

What to do in Wyoming

Cowboy Up! Welcome to Wyoming