What parent hasn’t heard that lament from a child at least once? It’s what my kids said when they heard we were headed to Colonial Williamsburg, touted as a living history museum.

Cue groans and protests from the backseat.

It took about five minutes into our first Williamsburg shop, a weaver making a blanket who asked my daughters to help spool wool, for the complaints to completely disappear.

Every following moment was pure fascination, whether printing a newspaper, firing a musket, or watching iron be molded over a blacksmith’s fire. Nearly two dozen colonial occupations are demonstrated by tradesmen and children are able to assist with many of them.

Colonial Williamsburg (not to be confused with the city of Williamsburg) is filled with restored or recreated buildings from the 17th and 18th centuries. The area is filled with re-enactors portraying everyday Williamsburg residents and those well-known such as George and Martha Washington, Thomas Jefferson, Patrick Henry, and former slave Gowan Pamphlet. They bring to life a period of time when America was on the brink of revolution. Most re-enactors converse at a level easily understood by youngsters in their discussion of the Revolutionary War’s impact on everyday life.

The most memorable moments were the unexpected ones: a troubadour singing in a tavern, a fife and drum troupe marching down the street, a conversation with Marquis de Lafayette. The sheer variety of possibilities and experiences is what exceeded expectations, whether tasting a cup of velvety chocolate at R. Charlton’s Coffeehouse or stomping water into the clay at the brickyard. 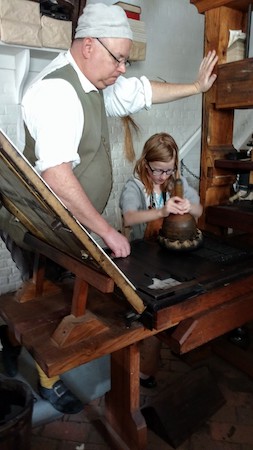 Walking the length of the pedestrian street to get bearings is time well spent. An admission ticket, identified by wristband, is only required to enter buildings. Some are still private residences but others are part of the history, with an open door to glimpse back in time. Those open to ticket holders are marked with a special flag. Inside, visitors can learn from tradesmen how they anticipate their lives changing at the end of the Revolutionary War. 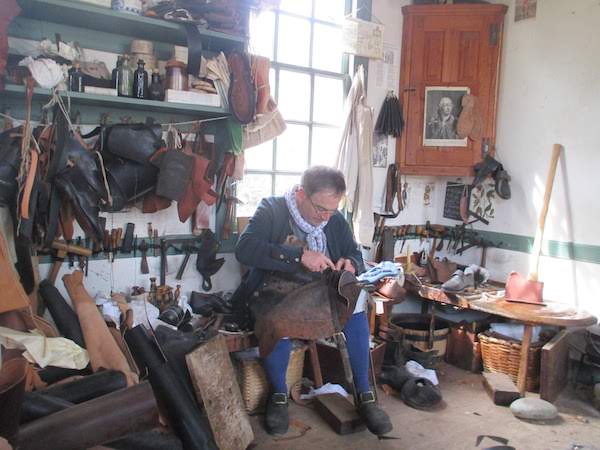 Leatherworking is one of dozens of occupations that can be observed.

A single day at Colonial Williamsburg could contain up to 50 different events, some requiring an additional ticket but most included with admission. Finding a daily schedule online or picking up a weekly paper schedule at the front desk can help narrow down options. We felt four planned events per day was plenty, but focus on the critical ones first. 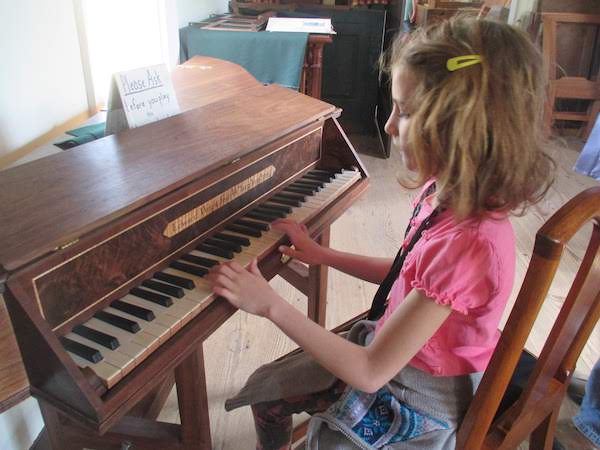 An antique piano begs to be played at a woodworking shop.

Making reservations at least a day in advance will reduce disappointment. Some activities like carriage rides fill quickly, as do  experiences such as playing authentic colonial instruments, firing a musket, or weaving and spinning workshops. Reservations can be made online or at ticket centers throughout Colonial Williamsburg. 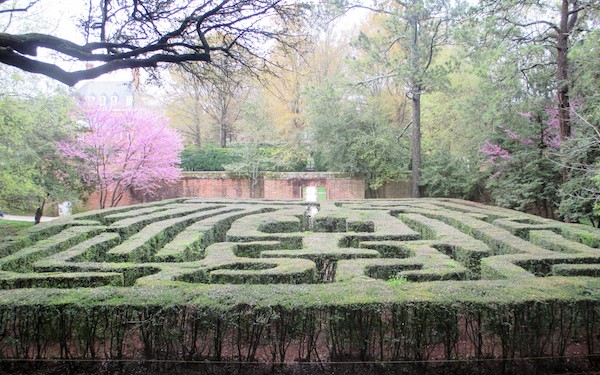 Get lost in a hedge maze at the Governor’s Palace. 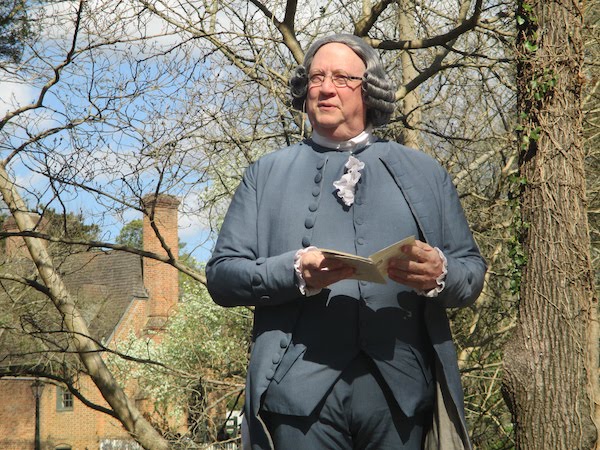 The least expensive option, Williamsburg Woodlands Hotel, has separate living areas, a kitchenette, and a fantastic free breakfast. It’s also adjacent to the Visitor’s Center where reservations can be made for the day’s activities. A shuttle runs from the Visitor’s Center around the historic area, passing the Art Museum and many area hotels.

A carriage ride through Colonial Williamsburg is a popular ticket.

Enjoy 18th century-inspired food at the Williamsburg Lodge, Kings Arms Tavern, Christiana Campbell’s Tavern and Chowning’s Tavern. Although all restaurants have children’s menus, more particular eaters may prefer Chowning’s Garden Shack or Merchant’s Square restaurants near the College of William & Mary, with pizza and hamburgers. Adventurous eaters may want to try peanut soupe, pottage pye, or a hot smoked turkey trencher at one of the taverns.

Several locations also offer grab and go, but with limited seating near these establishments it’s best to avoid peak dining hours or plan to walk and eat.

Heather Lusk is a freelance writer who loves travel and history. Between dragging her family to exotic locations, she’s attempting to maintain a 120-year-old house in Zionsville, Indiana.

Our National Parks – There’s More Than You Think

These 6 Unique Museums will Make you Love Lubbock