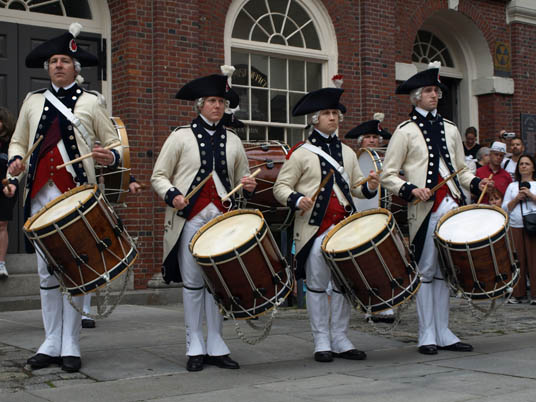 It’s called The Great American Road Trip for a reason. And, there’s no better way to celebrate America’s Birthday than to hit the road and experience history. This Independence Day, take a trip to one of America’s most iconic destinations to experience living history, hometown America or learn more about why we celebrate this great holiday. And, of course, the fireworks! It’s also acceptable to just get away, drink suitable beverages and relax! In a historically significant place, of course. All of these trips are easily done on a short weekend, but could be extended for a week or more if you wish.

There are dozens of side trips where you can look for fossils or do a little fishing or immerse yourself in history and visit the sites of the War of 1812. Download the brochure with complete information and maps here.

The nation’s oldest city, St. Augustine, is filled with historic sights (more than 60 to be exact), 16th century buildings (36 are original colonial and another 40 are reproductions), narrow brick-paved streets, fortresses and horse-drawn carriages. And, more than 40 miles of beaches. Best of all, many of the kid-friendly attractions are free.

The city was established by the Spanish 42 years before the English colonized Jamestown and 55 years before the pilgrims landed at Plymouth Rock. The Castillo de San Marcos, completed in the late 1600’s, survives today, and is the highlight of a 4th of July weekend in St. Augustine. Be sure to check out the hidden chambers! The fireworks show above the ancient fort is reflected in the waters of Matanzas Bay.  Admission is free, with the best vantage points along the bayfront between the Castillo and the Bridge of Lions.

While you’re in town, make sure to step on the very ground (well, at least what’s covering the ground now) where U.S. history began — Ponce de Leon’s Fountain of Youth.The story goes that Ponce de Leon was searching for the spring of eternal youth and discovered Florida in 1513. Within the boundaries of what is now The Fountain of Youth Archeological Park is the oldest continuously occupied European and African American settlement in the continental United States. There is a charge to enter the park, but perhaps drinking the water is worth it! 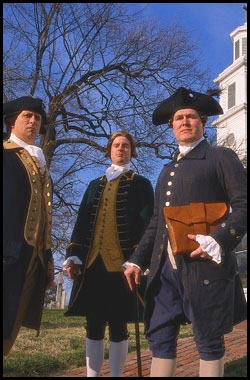 Within driving distance of half of the US population, Richmond is a great road trip for families any time of the year. But for the 4th of July, it has extra significance. Virginia claims to have more history than any other state, so you better get started early. Begin your trip in the Historic Richmond Region, where 400 years of history are yours to explore.

The Virginia State Capitol was designed by Thomas Jefferson and houses the oldest legislative body in the U.S. as well as the only statue of George Washington that the first president himself actually posed for. It’s also free to tour.

Then, cruise up to the Church Hill neighborhood and catch a re-enactment of Patrick Henry giving his famous “Give me liberty or give me death speech” at historic St. John’s Church, the actual location where Henry delivered his most famous words.

Grab a bite across the street at the Patrick Henry Grille and head to funky Carytown, Richmond’s nine-block “Mile of Style,” for a dose of shopping and chocolate. Stop by the always amazing and always in bloom Lewis Ginter Botanical Gardens. Need a break from history? Hit the amusement park Kings Dominion for some wild rides. 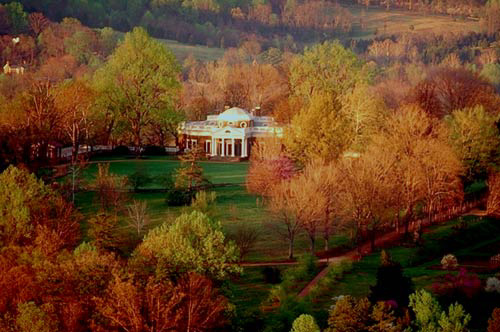 A great day trip from Richmond, Charlottesville was mostly spared during the Civil War, which means it wasn’t burned to the ground. The homes of three US presidents are located here: Monticello, home of Thomas Jefferson, Ash Lawn-Highlands, home of James Monroe and Montpelier, home of James Madison.

In case you forgot your US History 101, Thomas Jefferson was the third president of the United States and author of the Declaration of Independence. He also died in Monticello on July 4th, 1826. (That’s a great trivia question!)

Each July 4th, there is a special July 4th celebration at Monticello, as well as a naturalization ceremony. It starts early in the day, so you could be back in Richmond for the fireworks at Byrd Park at night.

Don’t miss your chance to take a few stop on the Monticello Wine Trail. In honor of Thomas Jefferson’s early attempt at a vineyard in the area, the trail has mostly boutique wineries, but the quality of the wines is exceptionally high. 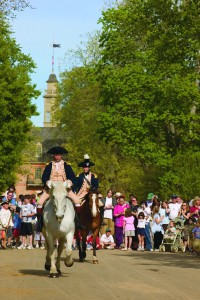 The capital of Virginia from 1699 until 1780, Williamsburg was the political, cultural and educational center of the largest, most populous and most influential of the colonies. Leaders included George Washington, Thomas Jefferson and Patrick Henry. In the Capitol building of Williamsburg on May 15, 1776, Virginia legislators instructed their delegation at Philadelphia’s Continental Congress to introduce a resolution to make the colonies independent from Great Britian. Thomas Jefferson’s Declaration of Independence was the response by the Continental Congress.

General George Washington and the combined forces of the Continental Army and allied French forces fought  British General Lord Cornwallis’s army to a historic surrender at Yorktown, a victory that led directly to the end of the Revolutionary War and gained American independence.  Events include Independence Day 5K run, Fly Over by 71st Fighter Squadron assigned to 1st Fighter Wing at Langley Air Force Base, Children’s Fun Center for kids 5-12, Sound of Liberty Bell Ringing Ceremony, performances by The Fifes & Drums of Yorktown and Yorktown Coral, Patriotic Concert by the U.S. Air Force Heritage of America Band, and Fourth of July fireworks display over the York River. The best viewing areas are along the waterfront and at the Yorktown Victory Monument. 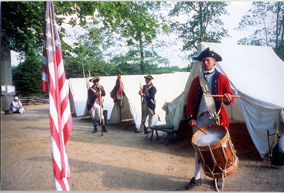 Liberty Celebration at the Yorktown Victory Center: From the beginning of colonial unrest to the formation of the new nation, the American Revolution is chronicled at the Yorktown Victory Center in gallery exhibits and outdoor re-creations of a Continental Army encampment and 1780s Virginia farm. On July 4 and 5, visitors can observe tactical and artillery drills, take part in a variety of military exercises, and learn about the sacrifices of everyday people as well as our nation’s founders, including those who signed the Declaration of Independence, as well as everyday people. The event also features Revolutionary War military re-enactors and a first-person interpretation of Continental Army soldier Peter Francisco, regarded as the “Hercules of the Revolution.” 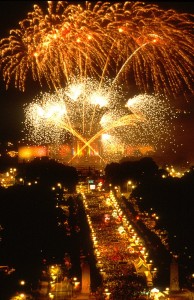 There is enough history in Philadelphia for a whole summer vacation. And, their celebration of America’s Birthday is just as big. In fact, Philadelphia’s celebration runs for two weekends, just to pack in all the excitement. Patriotic ceremonies center around the Independence Hall and the Liberty Bell and the all-important Fourth of July begins with traditional ceremonies on historic Independence Mall in the morning, followed by a parade through Historic Philadelphia.

Reminiscent of an old-fashioned Main Street, USA parade, the march features bands, flags and pageantry. In the afternoon, the action moves to the cultural heart of the city—the Benjamin Franklin Parkway—for Party on the Parkway, complete with games, food and live performances. When the sun goes down on July 4, musicians take to the stage outside the Philadelphia Museum of Art for a free concert under the stars followed by an amazing fireworks grand finale, made even more dramatic by the majestic museum backdrop. 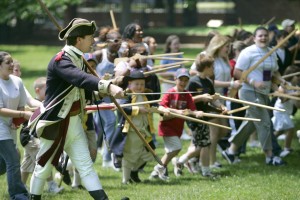 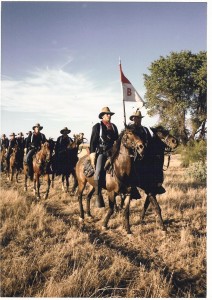 Southeastern Arizona is home to a different kind of history. The legendary kind with heros and villans like Wyatt Earp. And, in the tradition of the old west, the 4th of July brings lots of firepower. Start with the fireworks diaplay in Sierra Vista, the city adjacent to Fort Huachuca, an active Army post with ties to the Indian Wars of the 1800’s. It is famous as the post in which the historic Buffalo Soldiers were stationed.

An annual water fight competition between local volunteer fire departments is one of the highlights of Benson’s 4th of July celebration. Contestants try to move a barrel on a pulley system using pressure from water hoses. The barrels slide back and forth toward the opposing team. Spectators get a refreshing soak, and the kids can play in the mud. A parade, live music, and fireworks round out the fun.

Bisbee’s Fourth of July begins with the Bisbee Coaster Races down Tombstone Canyon, the oldest and longest gravity-powered race in the U.S. Between heats, runners compete in the Bisbee Iron Man Mile. A parade, watermelon eating contest and games are featured in Bisbee’s Warren district. Along the parade’s Vista Park route, food booths offer tasty morsels. The afternoon features contests of skill in traditional mining activities at Brewery Gulch. Muckers let their shovels fly, digging and fill mining carts with gravel in a timed competition and hard-rock drillers vie for cash prizes. Warren Ballpark, the nation’s oldest, where Dizzy Dean and the Babe himself payed, hosts an Annual Invitational Baseball Tournament. Wrap up the weekend with fireworks in the evening sky. 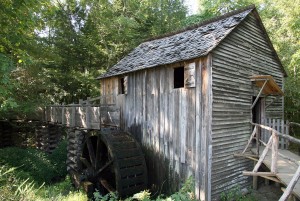 Gatlinburg has the distinction of kicking off the 4th with the nation’s first parade. That’s right, their parade starts at 12:01 am, on the 4th. This year, close to 100,000 spectators will pay a special tribute to the four branches of the military.

Leading the Annual 4th of July Midnight Parade will be a recreation of the presidential motorcade of Franklin D. Roosevelt as it traveled thru Gatlinburg to Newfound Gap in 1940. There, FDR officially dedicated the park while standing with one foot in North Carolina and one in Tennessee. The parade will stretch more than a mile in length, and the pre-parade festivities begin early in the evening with pre-parade entertainment. The parade is part of a complete four-day weekend festival, highlighting the armed services.

Other activities for the 4th include the popular River Raft Regatta. Register your unmanned river raft at 10 am (what a great family project!), the race starts promptly at noon. The rules are pretty simple, your raft can be constructed of anything that floats except balls and plastic eggs. Past contestants have entered rafts constructed from matchsticks, floating rocks as well as rubber duckies. An hour after sundown, the Fourth’s Grand Finale takes over the streets of downtown Gatlinburg. 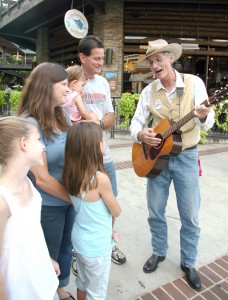 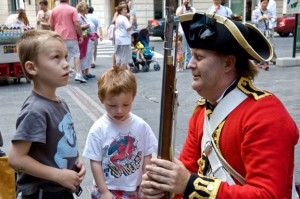 Families head to Boston to do the 4th in a big, big way. Over six days, Harborfest packs in over 200 events, including historical reenactments, walking tours, sunset harbor cruises, Chowderfest, and Children’s Day — all celebrating Boston’s colonial and maritime heritage.  A sampling of events on the 4th includes:

The Boston Pops Fireworks Spectacular is celebrating it’s 130th season, with fireworks over the Charles River to close out the celebration. The event is televised nationally and draws huge crowds. 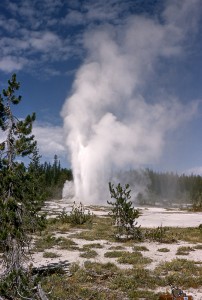 Unless you’ve visited and see first-hand, Yellowstone is something you can only partially appreciate. The boiling rivers, hot springs and geysers were too unbelievable for Lewis & Clark, they thought the Indians were making up tales, and never ventured closer than about 40-50 miles. John Colter, who is the first white man to discover the park was made fun of for years when he told tales of the place, leading to the name, “Colter’s Hell.” And, even esteemed Jim Bridger wasn’t believed. In 1872, Yellowstone became our first National Park, and now it is one of the iconic family camping sites in the country, a right of passage for any camper.

The 4th of July is such a popular time to road trip, we’ve written a whole series of articles, dedicated to helping you find the best celebrations for your family — whether you prefer small and hometown or the biggest and best the country has to offer. We don’t repeat recommendations, so check out this year’s picks, some hometown celebrations and parades, as well as our favorite 4th of July road trips. We also have lots of fireworks for other holidays as well — search “fireworks” in the search bar at the top right of our site.

Summer is the Best Time for an Oregon Coast Trip