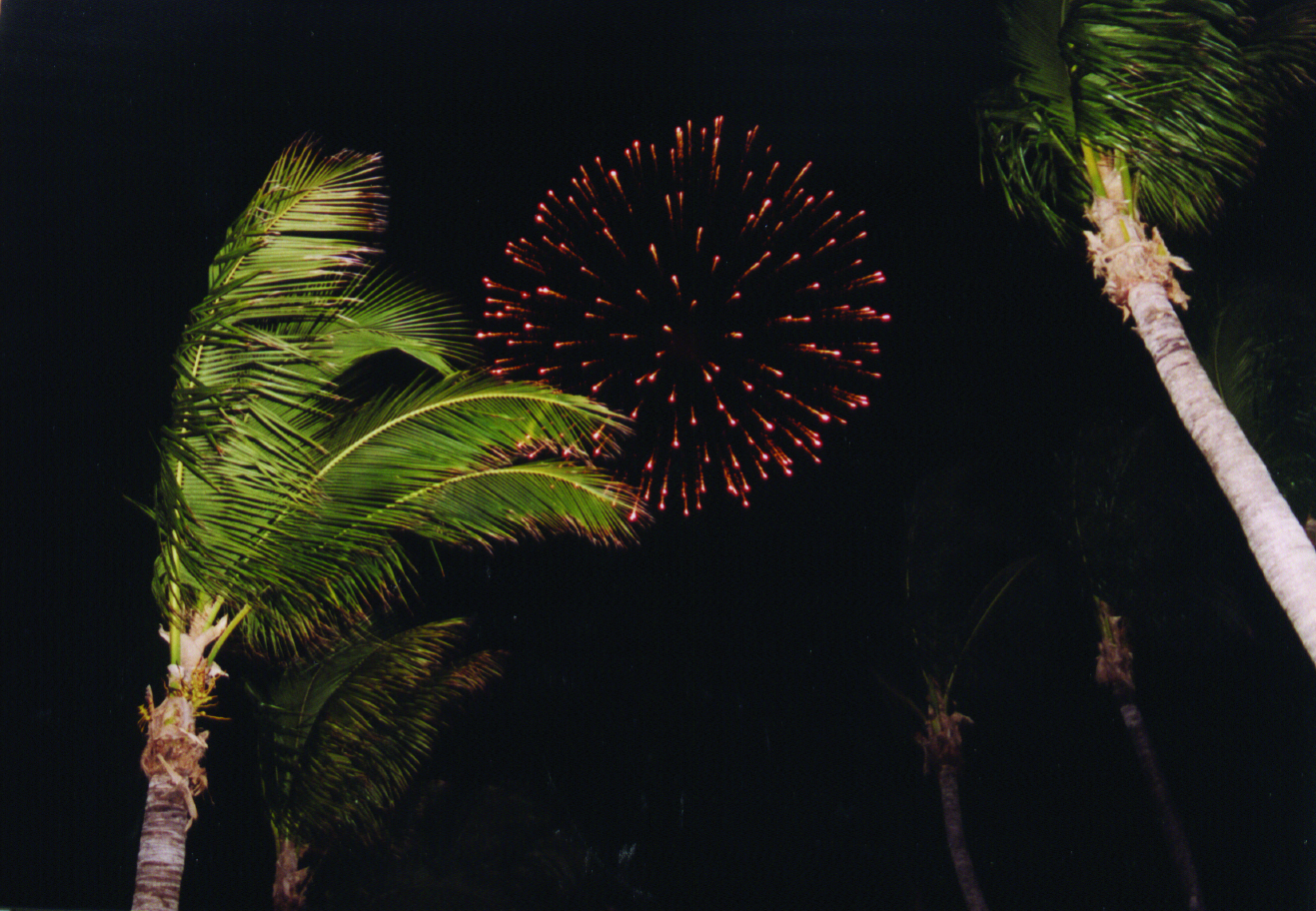 Quick guess. What’s our most popular article ever? Yep — our roundup of the best fireworks is the most searched for and read article we do all year. We take 4th of July seriously in this country and whether you like a small town celebration with a few hundred of your favorite people or want to do the Philadelphia mega celebration, there’s something for everyone. Each year, we pick the top 10 places we’d watch the fireworks, if we could be 10 places at once. Here’s where we’d go this year, where are you watching the fireworks?

We don’t repeat recommendations, so check out our hometown celebrations and parades as well as our favorite 4th of July road trips. We also have lots of fireworks for other holidays as well — search “fireworks” in the search bar at the top right of our site. 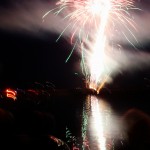 Located on Madeline Island in Lake Superior, just 20 minutes by ferry from Bayfield, this historic town is home to 200 residents who host one of the best 4th of July celebrations in the country. Gary Knowles, travel writer and dedicated fan of the celebration says, “Imagine a friendly mash-up of the old TV series “Northern Exposure” with the folks from Mayberry, a Jimmy Buffet Concert, Mardi Gras and a party at the Clinton White House. It’s a tableau that might have been painted by Norman Rockwell after sharing a friendly drink with Timothy Leary or a film collaboration by Fellini, Warner Herzog and Grandma Moses.” You had us at Jimmy Buffet, Gary!

The parade kicks off at 10:30 am with artist performances and eclectic floats (including the 1973 Smelt Queen and a giant grill truck tossing hot dogs to the crowd). After the parade there are speeches on the grounds of the historic museum with thoughtful remarks by the town chair, the museum director and sometimes the librarian. Music is provided by the musicians of Big Top Chautauqua. They sing Woody 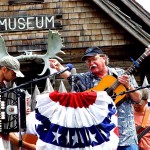 Guthrie’s “This Land is Your Land…” and don’t miss the verse with the sign that says “no trespassing” but on the other side it didn’t say nothin’ – “that land is made for you and me.” Prizes are awarded for the best parade displays and “green trophies” are recycled by islanders including bowling trophies, little league, go-kart, horse show, softball and even a few just awards recovered from the town dump. A community picnic, ice cream social and softball game fill the afternoon – after which people are primed and ready for the fireworks.

And the Fireworks are the best because (1) everyone gets an excellent seat up close in the harbor where after a spectacular sunset over Lake Superior (2) an eclectic variety of amplified patriotic rock, country and ballads are interspersed with readings from the Declaration of Independence, quotes from great Americans (MLK, JFK, Jefferson, etc) and others (Gandhi, Wavy Gravy, Dylan, Confucius, the Dali Lama etc) as (3) the lightshow explodes for about 45 minutes high overhead and is reflected in the harbor to a chorus of genuine heartfelt ooohs and ahhhhs. (Special thanks to Gary Knowles who generously shared information about his favorite 4th, including this video: LaPointe Wisconsin 4th with Big Top Chautauqua) 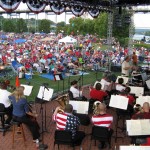 One of the best destinations for families that you probably haven’t thought about, Chattanooga is a great road trip for the 4th of July. The free Pops in the Park fireworks display in Coolidge Park is the finale to a long day of family fun. Or, enjoy the festivities during the day and then schedule a sleepover at the Tennessee Aquarium with their 4th of July “Sleep in the Deep” program. Watch the fireworks with 3D glasses and then sleep with the fishes.  The Chattanooga Lookouts, Creative Discovery Museum, Hunter Museum of American Art as well as the Delta Queen and Chattanooga Choo Choo all make downtown Chattanooga an awesome family destination and the free electric shuttle buses are a blast for the kids and easy on the budget and stroller hauler. If you want to get out on the river, check out the Tennessee Aquarium River Gorge Explorer and Southern Belle Riverboat.  Nearby Lookout Mountain also offers Rock City, Ruby Falls and the Incline Railway. And train lovers won’t want to miss the Tennessee Valley Railroad Museum. 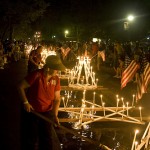 In Lancaster County (Pennsylvania Dutch Country), you’ll find something to keep your family enchanted almost every week of the year. Just 60 miles west of Philadelphia, the town of Lititz  is known for their unique shopping and local food all year long, and also for their oldest continuous celebration of the 4th of July. Held in Lititz Springs Park, the celebration starts Saturday, June 25th, with the summer music festival in the park and The Preamble — a historical community day in the park (June 26th). This year will feature the re-enactment of the 1843 celebration which featured the first candle illumination. The town parade takes place on the 1st, with entertainment in the park following the parade.

2011 is the 194th Continuous 4th of July Celebration (July 2nd) and gates open at noon (there is an admission fee) for non-stop celebrating, including the 70th Annual Queen of the Candles Pageant, the 168th Illumination of the Candles and of course, fireworks! If you’ve never seen coverage of the candles pageant and illumination, it incorporates over 7,000 candles! It’s a unique and interesting way to celebrate the 4th, and kids will never forget the trip. 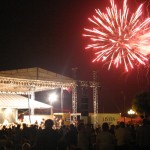 The Waterfront Independence Festival is held on the Great Lawn at Waterfront Park and has not one, but two huge fireworks displays and two days of celebrations to go along with them. The Catfish Louie Kids Area has special activities for kids (science experiments, a half-year checkup with Santa and inflatable games plus watermister) to keep everyone happy and entertained. While you’re in Louisville, don’t miss the Slugger Factory, where trees are transformed into baseball bats for Alex Rodriguez, Derek Jeter, or one of many other professional baseball players in the game today—or maybe even your own Little Leaguer! The Louisville Science Center is designed for families and the Louisville Zoo is a don’t miss destination. Other family favorites include the underground adventure at Louisville Mega Cavern and the Belle of Louisville.Take time to explore the Waterfront park with all its bike trails and playgrounds and geocaching. 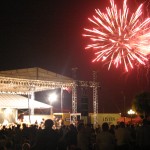 Clearwater Celebrates America, the city’s annual Independence Day celebration, will take place July 4 in Coachman Park and features live music,  fireworks, children’s activities and a craft show. Expect activities to get started about 4.30pm with fireworks at 9.30pm. One of the many family-friendly destinations in the area, Clearwater is the setting for the summer movie Dolphin Tale, which features the city’s most famous resident, Winter the Dolphin.Winter was caught in a crab trap and lost her tail, but with the help of a doctor she now has a prosthetic tail and has been an inspiration to many. While in the area, other popular family attractions include Adventure Island (an outdoor water park), Busch Gardens Tampa Bay, Clearwater Marine Aquarium, The Dunedin Fine Art Center/David L. Mason Children’s Art Museum, and Lowry Park Zoo. 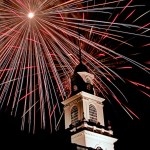 The first state in the Union, Delaware is smack in the middle of any good American history road trip. The 4th of July kicks off early in the day with activities, walking tours, historic building tours and Colonial kids games.  The local American Legion hosts a patriotic parade down State Street to Dover’s historic Green (where the Constitution was ratified in 1787).  After that, bands perform patriotic music, food vendors set up and additional kids activities take place.  At dusk, the 1812 Overture is performed with cannon firings, followed by a huge fireworks display.  All events are free of charge. There’s plenty to enjoy outdoors in the area when you’re done with the history lesson. And, all your shopping is free of state sales tax, so plan ahead and pick up some school supplies. 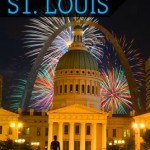 Celebrate “America’s Biggest Birthday Party” at Fair Saint Louis under the Gateway Arch. It’s free and spectacular. Live music, educational activities, air shows and fireworks all add up to a lot of fun. The three-day celebration starts with the Veiled Prophet Parade, and then the festival opens. Local bands as well as top-rated national performers provide lots of music and the Fair Saint Louis Air Shows feature some of the top air show performers in the country. Three nights of fireworks makes this one of our top picks, but we also love the fund-raising the event provides to local non-profits. 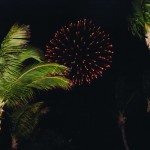 The road trip to the Keys is legendary, and kids love it — as well as the vacation afterwards. There are also several fireworks displays to choose from. Marathon’s Sombrero Beach has a parade to the beach with all-day fun and fireworks after dark. Gather on the bayfront in Key Largo to watch the fireworks lofted over Blackwater Sound or go to Founders Park on Plantation Key for the “Spirit of Islamorada” evening celebration that culminates with fireworks. Not to be left out, Big Pine and the Lower Keys host their annual fireworks at the Sugarloaf Airport, bayside on Sugarloaf Key. Their “longer and larger” fireworks show starts at nightfall. 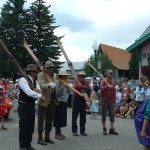 Take a long-weekend road trip to the Gunnision, Crested Butte and Mt. Crested Butte, area. Home to one of our newest national parks — The Black Canyon of the Gunnision, Gunnison County includes 10 quaint and historic towns and is part of the West Elk Loop and Silver Thread Scenic & Historic Byways.

The whole family will enjoy the drive as well as the gallery crawl, concerts, performances of “Oklahoma,” farmers ‘ markets, a one-third marathon, a parade, a pancake feed, fireworks, hot air balloon rally and more. The events start July 1st, and conclude with the festivities on the 4th. In Crested Butte, start your 4th off with a little health and fitness and participate in the aptly named the Annual Gothic to Crested Butte Run, Walk or Crawl, then take part in the hometown parade, famous for its over the top floats, which have included water slides and zip lines! Then, head down to the giant and water fight (yep, the whole town gets wet — including a fire truck). Dry off, try your hand at the log saw competition or the pie eating contest, three-legged race and more. The Boston Brass concert begins at 4 pm, followed by a free Alpenglow concert and another free concert at the base area of Crested Butte Mountain Resort, followed by fireworks at 9:20 p.m.

Less than an hour from both Reno and South Lake Tahoe, Virginia City’s role in expanding the country is full of legends and history. Virginia City was founded with the discovery of the Comstock Lode and once had so many millionaires that it was called “the richest place on earth”. The road trips around the city are spectacular, winding, twisting trips and road tripping families will love every minute. Thousands take the trip to celebrate the birth of our nation every year, starting with the noon parade downtown. The Comstock Cowboys perform at dusk and the fireworks show lives up to the reputation of the mining town with plenty of explosives.