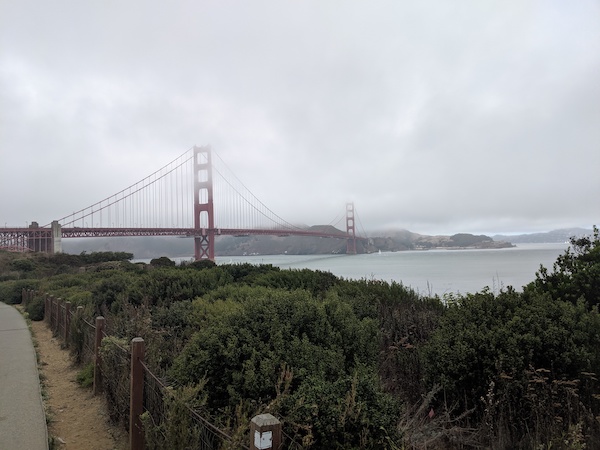 I recently took a road trip with my 12-year-old son from Eugene, Oregon to Oakland, California to visit a friend. My friend needed a car, and I happened to have one I was no longer driving, so it seemed like the perfect time to go for a drive, visit my friend, and leave her the car for a while.

That meant packing the car with snacks and drinks, and buying an Amtrak ticket for myself and my son to get back home. It was a quick trip, driving straight there, then going out for one night to a concert with the kids in tow, then enjoying Golden Gate National Park the next day, then heading out on the train. Even though it was a very short trip, we packed as much into our time as we could.

My friend has children my son’s age, so he was eager to get there as fast as possible. I offered to make some stops along the way, but he wanted to have as much playtime as he could get once we got there. If you want to make some stops, however, there are numerous options.

One is In-N-Out Burger. This spot is a perennial favorite because the locations are limited. In Oregon, there were only two in Grants Pass and Medford, until recently when the company opened a third location in Keizer. Once you get into California, there are certainly many more, but when coming from up north, stopping for lunch near the Southern Oregon border makes for a nice travel break.

If you stop in Grants Pass, seek out the 17-foot tall Grants Pass Caveman statue, which has stood on a giant rock pedestal guarding the entrance to Grants Pass since 1971. This is one of those iconic roadside stops that harkens back to an older time in road travel. 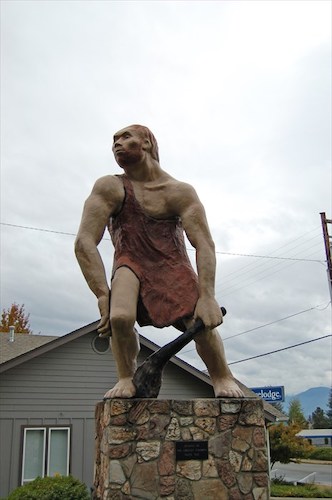 The Oregon Caveman in Grants Pass

On our drive we left in the morning and made great time, arriving at my friend’s doorstep at 5pm. That left us plenty of time for visiting and dinner before we took the bus to an iconic all ages venue called 942 Gilman. My friend had a friend whose band happened to be playing that night, so we went to the club with three children ages 10, 11, and 12, and two adults. It was friendly and welcoming, and they had a small sitting room with a couch where the kids could hang out, and a small store with snacks and drinks. If you’re into music, the Gilman is a world-famous club where tons of bands play when they’re just getting famous.

The next day we ate brunch at Sam’s Log Cabin. The place is small, although when the weather is nice, which is often, there’s a large outdoor area. It actually looks like a log cabin, and has a rich history dating back to being built from a Sears Roebuck catalog kit back in 1930. The menu has something for everyone: pancakes, French toast, eggs. Grits, even lake trout and chilaquiles.

When we were fueled for our day, we took the BART into San Francisco. It was nice to be with a local who knew the stops, but even if you don’t, the app and the signage makes it easy to find your way around. We went right through the city, and my son could not stop looking out of the window at everything, even when we were underground. It was the biggest city he had ever been in, and he wanted to take it all in.

We got off at the Presidio Park stop, and right there is a great little coffee shop called Cafe Luna, where you can get bagels, smoothies, or coffees if you need a pick me up. It’s just a short walk to the park, which is rich in history since the time of Spanish exploration. 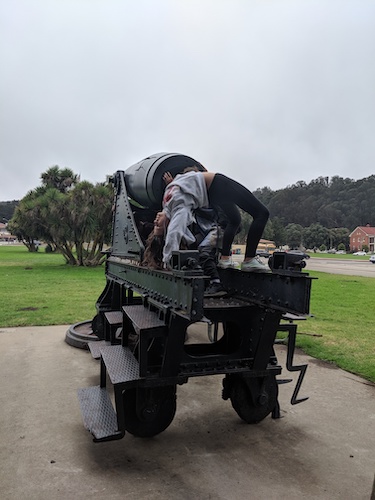 There are numerous walking paths through gorgeous woodland areas and manicured parks, if you just want to stroll. One unique attraction is the Walt Disney Family Museum. Admission is $25 for adults and $15 for youth 6-17, but that’s a small price to pay if you’re a Disney fan. Once in the museum, you can learn all about the remarkable life of Walt Disney, and experience interactive galleries narrated by Walt himself, along with early drawings, cartoons, films, music, a model of Disneyland, and more. 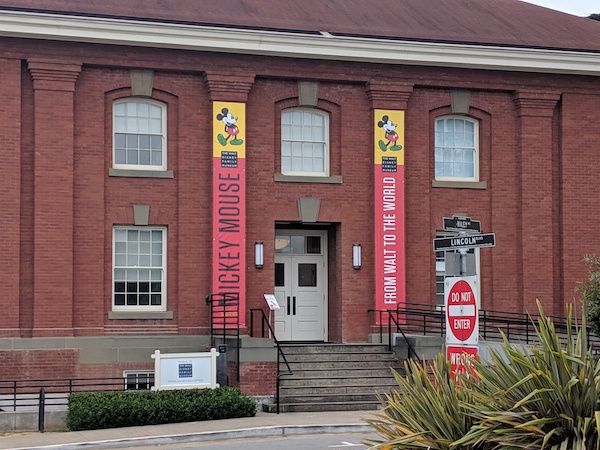 The park provides great views of the bay and the bridge. In fact, the Presidio is where San Francisco began. Founded in 1776, the Presidio served to defend the port under the flags of Spain, Mexico and the United States before it became a national park in 1994. 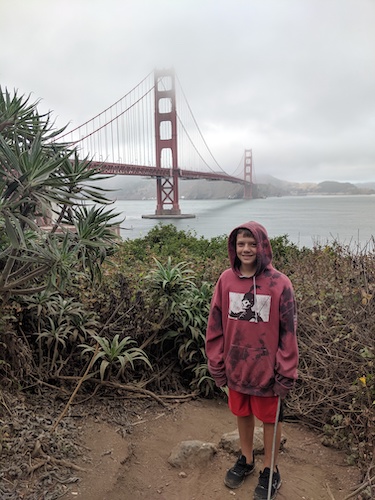 There are numerous photos opps of the bridge from Presidio Park.

Presidio Park is right at the base of the Golden Gate Bridge, and you can walk right onto the bridge from the park, which was the highlight of our day. The entryway to the bridge has displays explaining the history, plus some interactive exhibits that explain the engineering of this impressive structure. The bridge is 1.7 miles across, and there is plenty of views to take in along the way, including Alcatraz, boaters, windsurfers, and sea lions that will likely be swimming below. It took us an hour and a half or so to make our way across. Be aware that it can be windy, foggy, cold, or rainy, and the weather can change quickly. 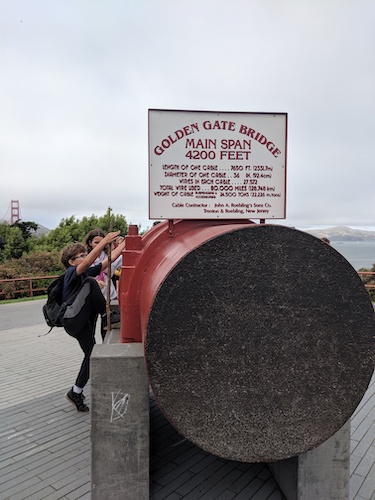 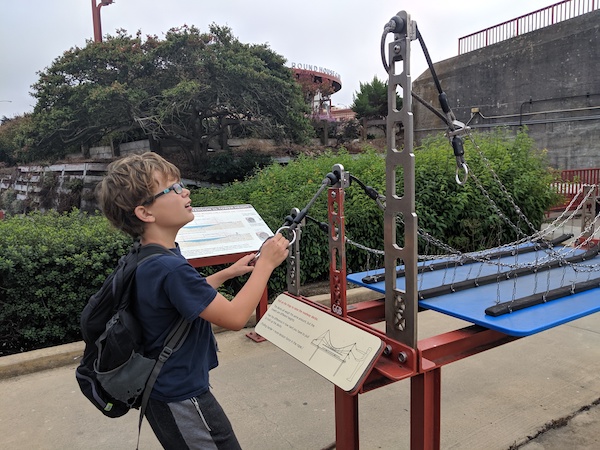 Presidio Park has interactive exhibits explaining the bridge’s history and construction, like this one that lets people explore the cable engineering.

Once across, you’re in the town of Sausalito. Take a cab into Sausalito’s cute downtown, and walk along the bay, where you can find a plethora of shops and restaurants. After we ate dinner at a charming white tablecloth Italian place, called Aurora, that also served delicious pizza, we walked to the ferry port and took the last ferry back to SF. It was fun seeing the lights at night, especially on the Oakland Bay Bridge, which had a timed light show playing across its entire span. 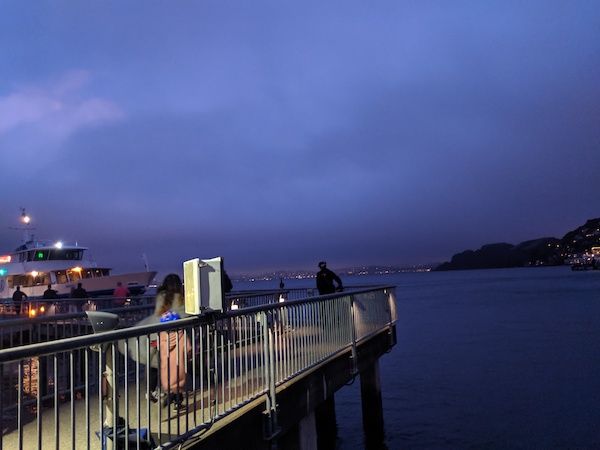 The last ferry leaving Sausalito provides beautiful views of the harbor and bridges at night.

After getting back into the city, we once again took the BART back to our friend’s house. Then we drove to the Amtrak station for the return trip home. One major downside on this trip was that Amtrak no longer offers WIFI on its Coast Starlight. I booked business class, expecting to be able to work a little on the train the next day. I had spotty service on my phone, and was really disappointed that there was no WIFI. However, business class came with more leg room and a meal credit. But still, no WIFI was a major and unexpected bummer. My fault for not checking first, but I just assumed that business class would have WIFI, so be warned!

Want to stay in a hotel in San Francisco? Find your hotel by searching right in this box.