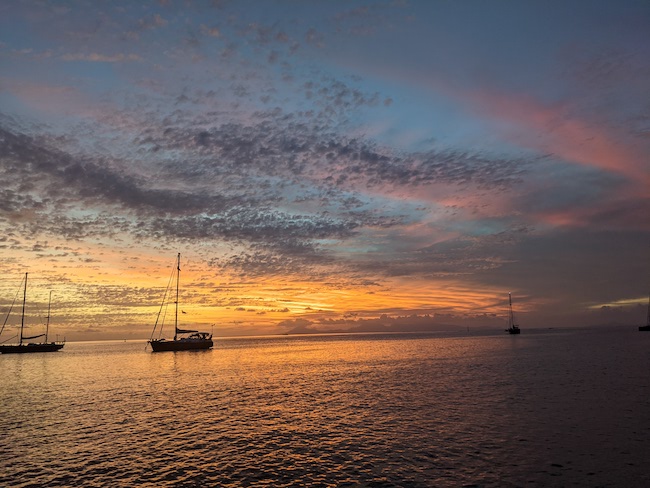 I recently went to Tahiti for the first time, and it was, in a word, magnificent. If you’re like me and you like tropical environments such as Hawaii, you’ll LOVE Tahiti. While Hawaii is a U.S. destination and as such as very familiar (you can get a good IPA and a cheeseburger just about anywhere, for instance), there are many differences that make it clear that in a destination such as Tahiti you are in another country. (Read about where we stayed in this article. That gorgeous header image is from the public beach within a 5-minute walk of the Maitai Lapita Village on the island of Huahine.)

I wasn’t sure what to bring, because I didn’t totally know what the weather would be like, and I had read some reports that said that basic items are hard to find. Here’s a list of what I brought and what we didn’t need, along with things I’d recommend you bring on your trip to Tahiti.

We went in December, which is Tahiti’s rainy season. We were told that before we arrived it had rained 10 days straight. But during our two weeks there, it only rained on two days. One day it rained most of the day but it happened to be on a day when we were traveling from the island of Tahiti from Papeete’s airport to the island if Huahine. Our noon flight had been canceled and we hand’t received notice of it, so we stayed for a few extra hours in the airport. We were under shelter, sitting outside, and just enjoyed talking, people watching, and having an espresso from the little cafe. (Of note, there is a VERY popular McDonald’s in the Papeete airport, where everyone in the community seemed to end up for a meal, even if they weren’t flying anywhere. They have a McDonald’s version of the ubiquitous ham and cheese on baguette sandwich).

But I digress. I brought two bathing suits and several dresses. I brought a wool serape-type wrap and two pairs of light pants. I thought I might need the pants in the evening but I didn’t. Nor did I need the sweater or any kind of rain jacket or long sleeves. It was warm, even when it rained. I did like having the wool wrap and the leggings for the plane. You can go from breakfast to beach to dinner with a simple sundress.

The strap of my sandals broke on the fourth to the last day. It was a bummer, because they were my most comfortable, walkable sandals and I ended up needing to purchase a cheap pair of flip flops that were $16 from a market. They weren’t comfortable and gave me blisters. So, perhaps a back-up pair of comfortable shoes would be in order. I also brought along water shoes, which I highly recommend because the sand can be sharp, and many of the beaches and snorkeling spots are covered with coral. Here’s the water shoes I bought from Amazon:

One of the most brilliant pieces of advise I found when I searched travel forums about Tahiti was to bring a Magic Bullet blender to make your own drinks. I was skeptical because, seriously, could it be worth lugging this piece of equipment halfway around the world? The answer is yes. There is fruit literally EVERYWHERE and if you’re into fruity rum drinks, which I am, having a magic bullet means you can make your own mango smoothies for breakfast (without the rum, or, not!) or turn a pineapple into a base for adding your own liquor. We definitely went poolside and enjoyed drinks from the bar as the sun went down, but we also enjoyed being able to take fruit from the market stall and make our own drinks in our hotel room whenever we wanted to. One good combo: watermelon with coconut and lime rum added.

We packed our own airplane bottles in our checked luggage, which is another pro tip. You can take as many airplane bottles of liquor as will comfortably fit in a quart-sized bag in your carry on, according to TSA. In the grocery stores, you will find agreeable prices on a lot of liquor and wine, if you don’t want to do that. If you’re on the island of Huahine, don’t miss a visit to Huahine Distillerie. The owners make their own spirits and are a super friendly couple. But be warned . . .  they shut their doors for “siesta” at 12:30 promptly, so don’t be late. The distillery is just past the road through Huahine village, to the right. Just keep going a little farther . . .  and you’ll see it. 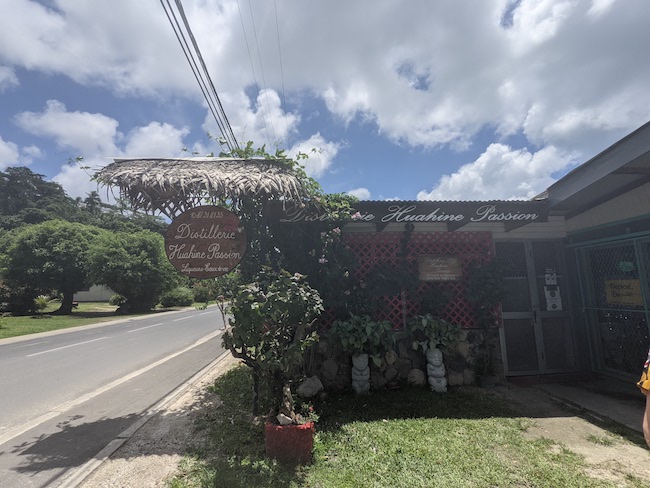 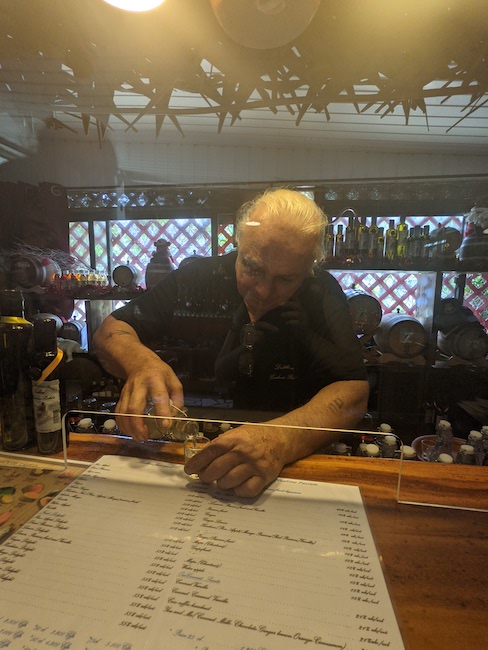 Huahine Distillerie is generous with the samples of their delicious liqueurs and spirits.

I brought two things that we used a lot . . . we each had our own utensil set (the one I got is awesome because it has a cleaning brush, chopsticks, and two straws in a zipper protective case. We used it ALOT.) and our own quick dry towel. The towels weren’t as large as bath towels but are much larger than wash cloths. We frequently went to the grocery stores and bought cheese, cured meats, and baguettes (fresh, delicious bread can be had for about 90 cents per baguette) and ate those for our mid-day meals when we were out and about. The utensil set and the towels came in handy for picnics, to sit on the sand on, to wipe off our sandy feet, and even as shade. Speaking of shade, another fantastic purchase I made before this trip was a packable hat. Check out what I ordered from Amazon in case you’re interested in getting your own:

I can’t overestimate how important it is to use sunscreen, whether you bring your own, which we did, or buy it there. Sunscreen, along with other basic toiletries like aspirin and bandaids, are things we brought along. We ended up not needing the medicines, although I did end up using the bandaids (see broken shoe, as mentioned above). Get coral-safe sunscreen, since one of the main things that makes these islands beautiful is the coral they are based on. Don’t kill the coral just so you can snorkel with the gorgeous fishes.

We don’t own our own snorkeling gear but I plan to get some before we go back to Tahiti or to anywhere with the potential for snorkeling again. In Tahiti, you can snorkel anywhere, including right off the hotel pool, and you can see some neat small and colorful fish. Just about any beach you can sink your feet into has snorkeling opportunities. We took a lagoon tour, which is highly recommended, and the tour guides had snorkeling gear for use, but I would have been happier to have had my own.

Things You Don’t Need In Tahiti

There are some things we packed that we didn’t end up needing, although they seemed like good ideas at the time. One of the main things was little flashlights. I thought we would need them as we walked around the lodges or if we walked back from the beach after dark, but we just didn’t. I also anticipated that there would be mosquitos, so I ordered mosquito wipes packets from Amazon, but there. Weren’t. Any. Mosquitos. None. Even in the marshy areas. I’m not sure if there are mosquitos at other times of the year or not, but we had no bothersome insects at all, so that was surprising and delightful. Now that I have the mosquito wipes, I guess I’ll just have to plan a trip somewhere I CAN use them!

If you’ve gone to Tahiti or are planning on another international beach destination, I’d love to know what you brought along or what you think of my list!

Travel to Tahiti During the Pandemic?