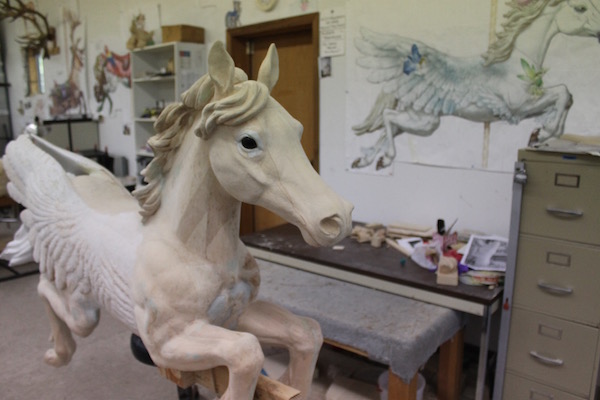 Located at 503 1st Avenue on the Western edge of downtown historic Albany, Oregon is the Historic Carousel & Museum—a building scheduled to be demolished in about three years. And when this happens, the Albany community will celebrate like the circus moved to town! 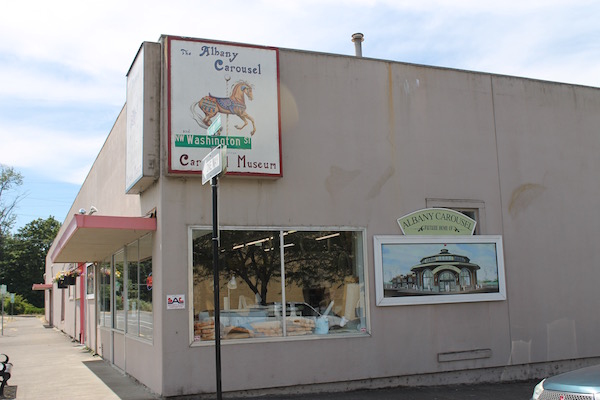 Open daily from Monday through Saturday (10AM-4PM), visitors to the museum are welcome to come and see how giant blocks of basswood are meticulously hand carved and painted into the animals and chariots that will one day sit proudly in the city’s brand new Albany Carousel—assembled and built in a new, modern, facility housed at the same address. 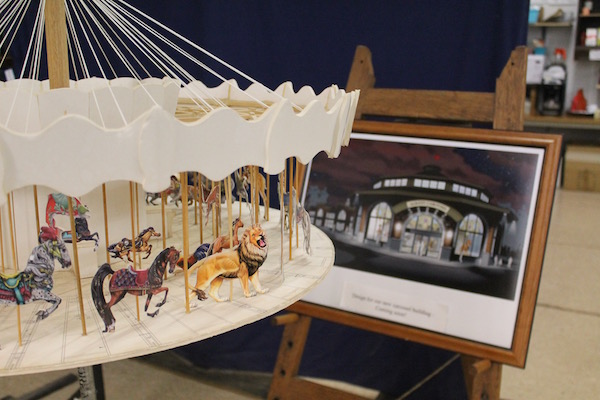 A project that began in 2002, production of the carousel is overseen by a The Albany Historic Carousel and Museum, a 501(c)(3) organization that has been raising money through grants, fundraising, donations, and sales from the on-site gift shop. Each animal has been sponsored by someone in the Albany community and has its own back story. 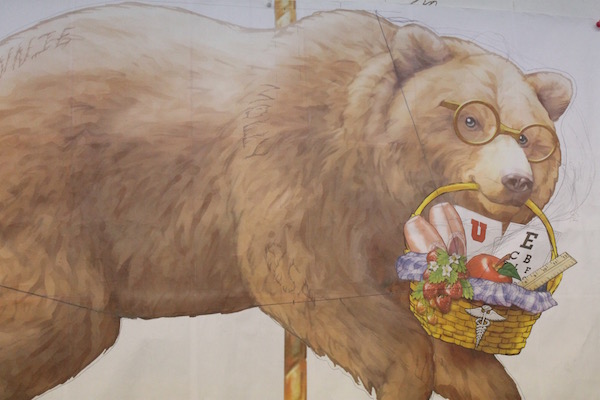 Consider Grizzly Berry,sponsored by Dr. Merle and Carol Ann Berry. Dr. Berry is now-retired from his career at Albany Eyecare Associates; his two sons are currently practicing at the clinic with other optometrists from the area. Naturally, Grizzly Berry is wearing glasses and if you look closely you can see the names of the Berry grandkids etched into the tan-colored fur. 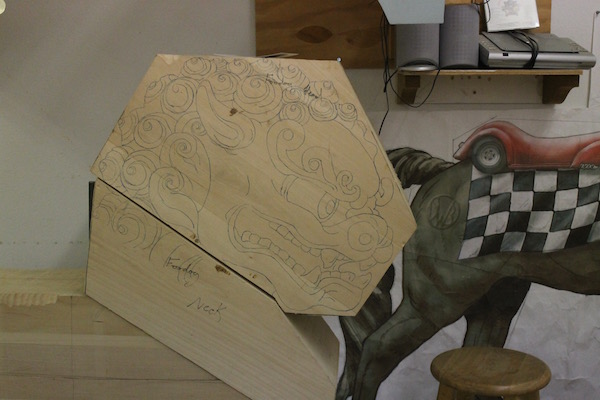 Overseen by head-carver Jack Giles and lead-painter Gwenn Marchese, the carving process can take over 2000 hours, with an additional 400 hours spent painting, coating, drying, and clear-coating the finished product. 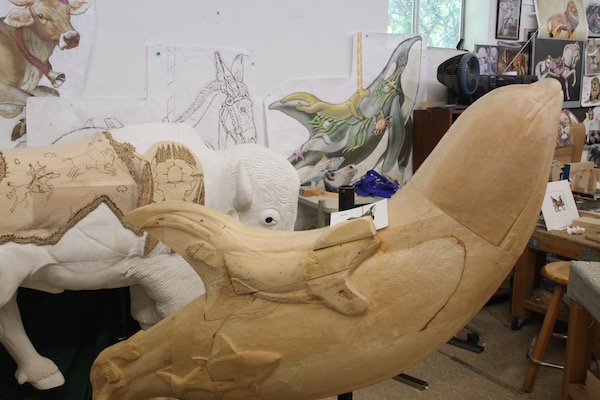 As you walk around the studio, animals sit in their carving stations in various stages of completion. Color paintings line the walls and various reference materials are scattered on the shelves and tables. The conceptual artwork was created by Terryl Whitlatch, who has worked for Disney and George Lucas in the past. Kurt Christensen, is the projects’ current artist. Christensen was an illustrator for the PBS cartoon, Dragon Tales. 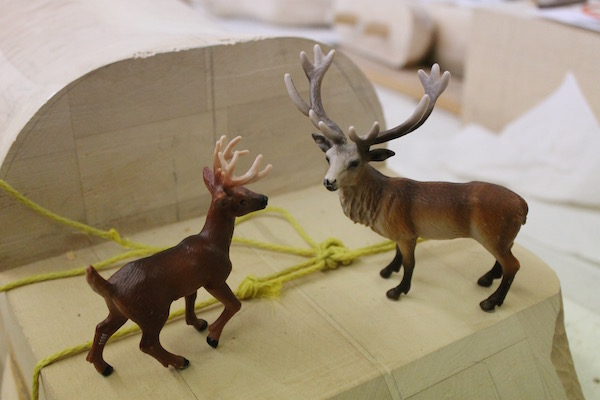 All of the carving is completed by volunteers who receive training, starting on smaller projects and graduating to the animal carvings. Carvers and painters are typically found working on their projects during open hours and are happy to answer questions and talk about the carousel project with museum patrons.

Meanwhile, the carousel mechanism has been undergoing its own restoration in a private location. Donated to the city of Albany by the Dentzel family (The Dentzels were the first manufacturer of carousels in America, opening their business in Philadelphia, PA back in 1870.), a team of engineers and builders have updated the original donation with new (quieter) wooden teeth on the turning mechanism and an electric push-button control system. 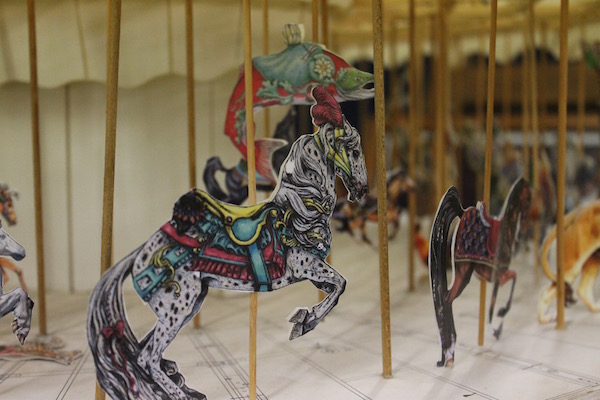 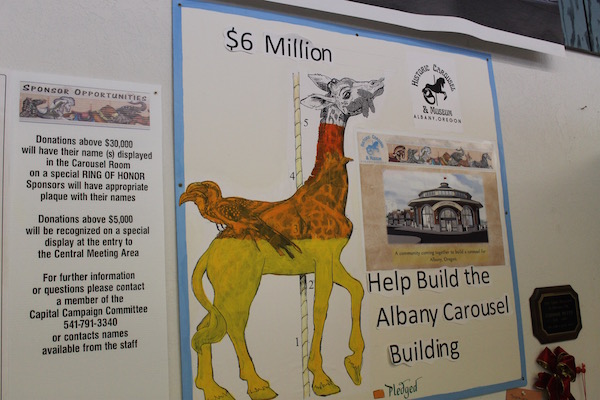 Look for the “Coins for the Carousel” plexiglass donation containers at local businesses. 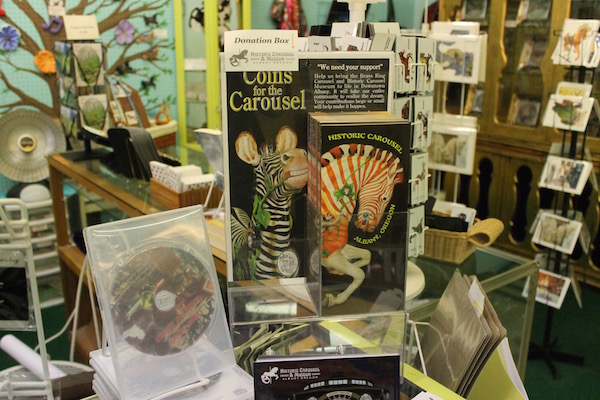 Or, you could also come in and make a purchase at the museum gift shop. My personal favorites were the carousel pencil sharpeners and the refrigerator magnets for each of the carousel animals (both are $1). 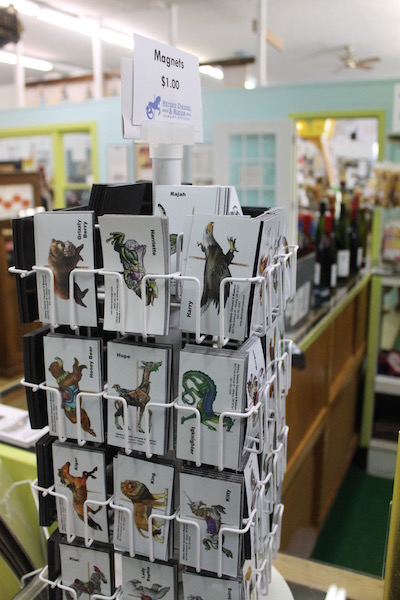 For more information on the project, including updated details on the construction of the new building and grand opening ceremony, follow the museum website: http://albanycarousel.com/

And for more ideas on “what to do” in Albany, check out this story: Kid-Friendly Venues in Albany, Oregon

Oregon: Magic and Tradition Mix at Christmas in the Garden Event