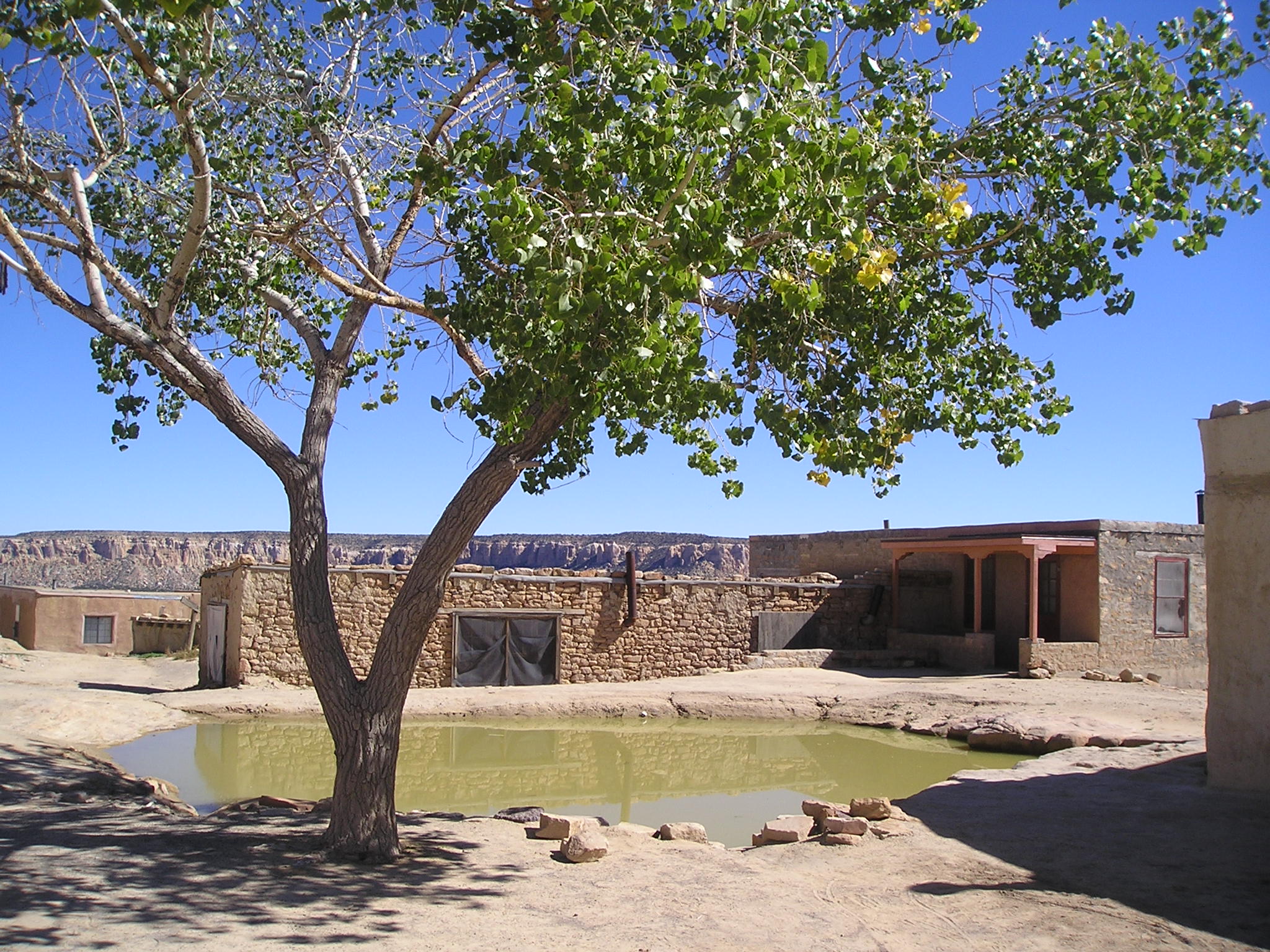 Our family loves the Albuquerque International Balloon Fiesta. But, because of the early morning and late night activities, we haven’t explored Albuquerque as much as we want to.

We asked Vera Marie Badertscher*, an expert on the area, to give us some of her favorite family tips. Vera has traveled to Albuquerque many times, particularly as she and Charnell Havens researched the life of Quincy Tahoma (1917-1956), a Navajo who lived most of his life in New Mexico.

The danger with starting a family road trip in Albuquerque is that your kids will not want to leave the city. I truly do not know another city that has as many family friendly attractions. So here’s a city road trip that only ventures a short distance north and west from Albuquerque.

A bit north of the city on I-25, you’ll come to Bernallilo (Burn-a-lee-oh). The nearby Coronado Monument gives kids an opportunity to imagine being a Spanish conquistador, but ours were also fascinated by the opportunity to climb down into a restored ancient Kiva (the center of religious rituals). Inside the visitor center, you’ll see reproductions of the original wall paintings from the Kuaua (Kwah-wah) pueblo where Coronado’s soldiers camped for several weeks in 1540.

If you’re in Bernallilo around lunch time, stop on the main street (which used to be Route 66) at the Range Cafe, a restaurant that has something for everyone. Try–good luck!–to resist buying some of their luscious desserts, displayed in a glass case by the cash register, for snacking later on. 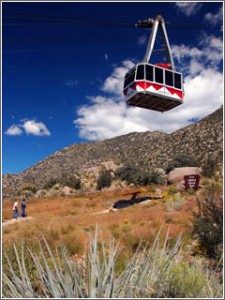 From under the ground, we soar 2.7 miles up Sandia Mountain on the world’s longest tram for an eagle’s eye view of the Rio Grand Valley. Go back toward the city and take the I-25 exit marked Tramway Road, and take the tram to the top of the mountain. If young explorers are still thinking about Coronado, they can imagine away the buildings below and picture a long train of soldiers trudging along the river. There is a casual buffet at the top, as well as an interpretive center to identify the very different flora you’ll see here as opposed to down in the desert valley.

After our mountain excursion, back on I-25, headed into town again, but one more stop lures us before we get too far. The Anderson-Abruzzo Albuquerque International Balloon Museum provides lots of hands-on and sit-inside exhibits that give a taste of soaring in one of those colorful balloons. The Balloon Festival held each in the adjacent Balloon Park really put Albuquerque on the tourism map.

After the Balloon Museum, we’re finally headed into the center of town, but instead of taking the 2nd major freeway that crosses Albuquerque–the East to West I-40,we  take the exit for Central Avenue. That street parallels part of the old Route 66 path (later replaced by the bigger, badder I-40). And here and there you will see traces of the “Mother Road”, like the 66 Diner on Central, a must-stop dining spot for families on the road. On the other side of the small downtown area, you’ll start seeing one-story motels, some with towering neon signs left over from the glory days. (See lodging for one of them) 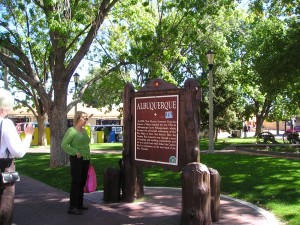 We always want to spend a couple of hours wandering around the Plaza of Old Town, near the intersection of Central and Rio Grande Boulevard. The shops are varied and fun, looking at American Indian art and Mexican imports. Or you can buy Indian jewelry from pueblo and Navajo Indians sitting on blankets lined up on the sidewalk. Good Mexican food can be found in several places (See Dining). But while you are in this area, don’t miss the Pueblo Cultural Center a few blocks away on 12th Street. This museum, run by the northern New Mexico Pueblos, is a very kid-friendly introduction to another culture and a good primer for a later visit to a living pueblo. On weekends, various tribes perform dances in the interior plaza of the Museum (or indoors when weather turns bad.) And, mom, just between us, the Pueblo Cultural Center is a GREAT place to shop for authentic Indian jewelry, pots and baskets. 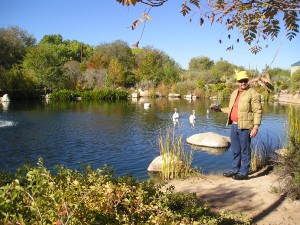 When you turn into the parking lot (off Central and New York Avenue) you’ll see the Aquarium on your left and the Botanic Garden on the right. You’ll gravitate to the Aquarium, but do not jump to the conclusion that kids will be bored by a bunch of plants in the Botanic Garden. We watched several people using remote control devices to steer model boats around a large pond, and were delighted with the model train layout that covers a lot of ground. Everybody liked the Heritage Farm–older folks enjoyed the restored historic farmhouse and its period furnishings while kids went for the barn and corals and real live farm animals. Not only that, but your family can board a train here and go to the neighboring zoo along the Rio Grande River. 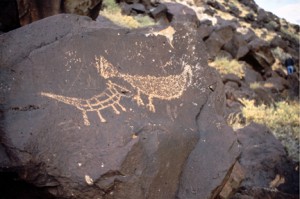 Tearing yourself away from Albuquerque to head west may be hard to do, but stuff the family in the car and get on I-40. But wait! What does that sign say? Petroglyph National Monument?”Mom, can we go see the rocks with pictures?” Well, isn’t a road trip all about diversions?

Indeed, the easy walks around the primitive gallery of rock art will be a wonderful road trip diversion for the restless ones who need to get outside and walk around for a while. Allow about a half hour, carry water, watch for rattlesnakes, and start a guessing game about the meaning of the petroglyphs. This is one game anybody can win, as scientists have no clear answers.

Albuquerque is encircled by Pueblos, but Acoma Puabeblo is definitely the oldest and the most scenic. From the time of the Spanish Conquistadors in 1540, through the arrival of the railroad and Route 66, the Acoma people (Haak’u, in their own tongue) have welcomed visitors to their 1200 year old village on a towering rock mesa.

It takes about 50 minutes to arrive here from Albuquerque, and you cannot really see the dramatic pueblo from the freeway, so drive the 15-mile road back to the Haak’u Museum and visitors’ center.

You can get an overview of the pueblo in the beautiful building that houses the museum, but for the full effect, board a tour bus and listen to an Acoma guide explain their history and culture. The sometimes bloody past includes a Pueblo rebellion when Catholic priests were thrown over the edge of the mesa. These stories are bound to get the attention of any restless boys and girls in your group, while those a little older may be contemplating what it would have been like to actually grow up on top of this mesa, where a lone tree is laughingly referred to as the Acoma National Forest.

Get a hamburger or more traditional American Indian food at the Ya’ak’a Cafe. By the end of your visit to Acoma, all those people who wanted to hang around Albuquerque will agree that Acoma was the highlight of their trip.

Places to Stay in Albuquerque

Budget: A restored Route 66 motel on the edge of Old Town, now goes by the descriptive, if not poetic name, Monterey Non-Smoker’s Motel. Don’t let their funky web site turn you off. We stay here every chance we get. Place to unload all the travel stuff, a refrigerator–what more can you ask? The couple who owns the place keeps the spacious rooms meticulously clean.

Medium: The Best Western Rio Grande Inn, comfy and quiet despite its location right next to I-40 has a shuttle that will run you in to Old Town, a few blocks away. I liked the pretty southwestern decorations and the fact that there is a coffee shop on the premises.

More Pricey: The Albuquerque Hotel (formerly Sheraton Old Town), a large hotel with tasteful Southwestern décor right on the edge of Old Town. Big lawn, big pool, nice restaurant. Everything you would expect in a hotel that caters to conventions. The location is very convenient. 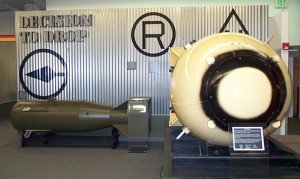 Atomic Museum Full name, the National Museum of Nuclear Science and History, a Smithsonian Affiliate Institution will appeal to all the science nerds and history buffs in the family.

Rattlesnake Museum Herpatologist in the family,or just like to get scared? This little museum in Old Town claims the largest collection of live snakes in the world.

Places to Eat in and around Albuquerque 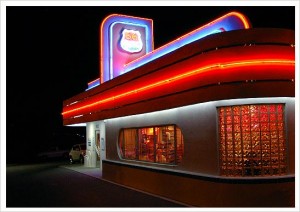 The biography Quincy Tahoma: The Life and Legacy of a Navajo Artist, is now available at independent book stores, art galleries, museums, and on their blog site. The book tells the life story of Quincy Tahoma (1917-1956) and includes 260 images. Badertscher also blogs about books and movies that influence travel at A Traveler’s Library.