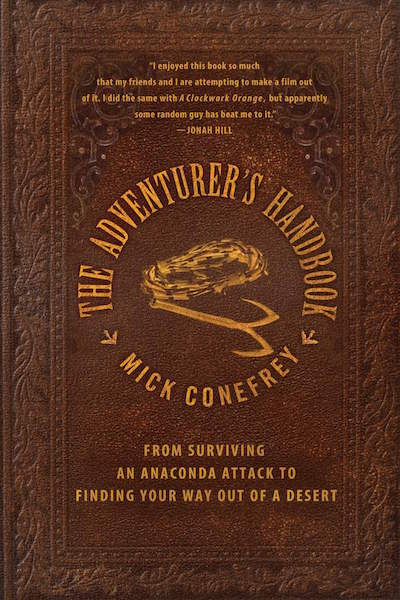 “Exploration is a complex and inherently risky business. There are many more failed expeditions than successful ones. Sometimes failure is put down to fate, and it is undoubtedly true that the natural world is rarely predictable; it is also the case that, to a larger extent, explorers and adventurers make their own luck.” (Page 150, The Adventurer’s Handbook: From Surviving an Anaconda Attack to Finding Your Way Out of a Desert by Mick Conefrey)

A form of modern exploration, geocaching also has the potential to be complex and inherently risky business. Case-in-point, the “Florida 2010 banana spider incident.” When presented with the opportunity to review The Adventurer’s Handbook, my first thought was Geocaching Survival 101. Banana spiders, bear encounters, dehydrated toddlers; the usual.

Lacking a useful table of contents, you’ll want to skim the index for your most immediate need. A better field guide for extreme caching (think five stars in both difficulty and train), I am officially removing  a skinny dip in the Amazon from my bucket list. Have no fear, when stranded in the Arctic, know that penguin is an easy kill (although seal brain is a much tastier treat). I also hope to never, ever, contract malaria, yellow fever, or experience an eel attack.

Dotted with real-life tips, such as following bees to water and NOT to suck the venom out of a rattlesnake bite, I really learned something from the section “how to always have a fresher pair of underpants on a long expedition” on page 147.

A suitable companion for your next camping trip, here’s what Road Trips Dad had to say about the book, “Family trips, especially of the camping variety, are always more of an adventure than you plan for. Mick Conefrey helps put these experiences into perspective, and the stories he shares even offer some important lessons. Take for instance the Cook expedition to Antarctica in 1897. Iced in for over a year, the men on board the Belgica became both physically ill and depressed. Men even went insane. A couple decades later when Shackleton went to the Antarctic, he made provisions for long periods spent in tight quarters. Men were allowed a little privacy from time to time, and routine kept the team focused on a goal. As any parent stuck under a dining fly during a day of torrential rain knows—you have to plan for downtime, and inactivity will drive everyone nuts.”

Available for $13.96 on Amazon.com, survival skills are priceless.

Why we Love to Garage Sale on a Road Trip