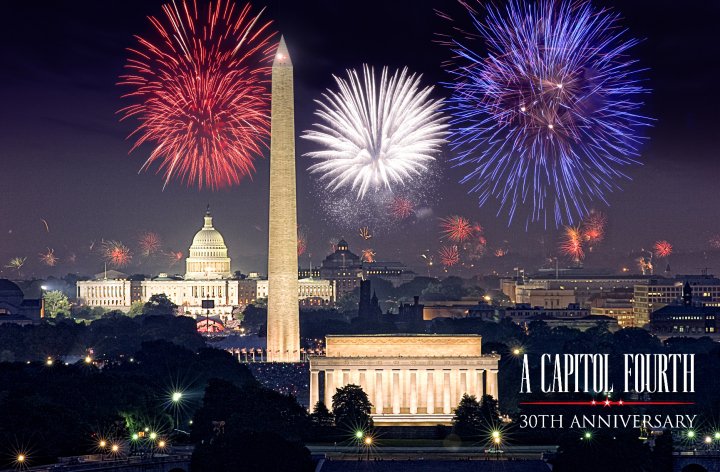 The 4th of July is such a popular time to road trip, we’ve written a whole series of articles, dedicated to helping you find the best celebrations for your family — whether you prefer small and hometown or the biggest and best the country has to offer. We don’t repeat recommendations, so check out some hometown celebrations and parades as well as our favorite 4th of July road trips. We also have lots of fireworks for other holidays as well — search “fireworks” in the search bar at the top right of our site.

Whether you’re going out of state, leaving the country or just packing a picnic and watching the fireworks, the weekend revolves around founding father President John Adams’ call for ‘pomp and parade, bonfires and illuminations” in celebrating Independence Day. Here are our top picks for this year’s pyrotechnics: 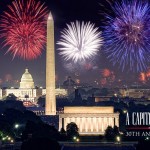 The all-day event in our nation’s capital culminates with probably the most famous fireworks display in the country, A Capitol Fourth. Be sure to check out all the other activities happening all day around the Capitol. Whether you watch at home or in person, expect stunning pyrotechnics. 18 TV cameras stationed around the city, including the U.S. Capitol, the White House, the Washington Monument and across the Potomac River will catch all the action. In celebration of America’s birthday, the show will be capped off with a rousing rendition of Tchaikovsky’s “1812 Overture” complete with live cannon fire provided by The U.S. Army Presidential Salute Battery, an audience favorite.

The 10th anniversary of Big Bay Boom promises to be as spectacular as ever. Fireworks will be discharged simultaneously from four barges placed strategically around the bay off Shelter Island, Harbor Island, North Embarcadero, Seaport Village and the Coronado Ferry Landing. Fireworks also will be discharged at the Imperial Beach Pier. Since more than 850,000 people are expected to come to the waterfront to watch the show, the Port of San Diego strongly encourages carpooling or taking the San Diego Trolley. The Port of San Diego has also set up free parking lots with shuttle service to Harbor Island and Shelter Island.

The annual fireworks display at the National Cherry Festival is the perfect end to a long day of festival fun. The festival draws crowds from all over the world, and the dramatic backdrop of Lake Michigan makes for unforgettable family memories. Earlier in the afternoon, catch the Festival Air Show, featuring the U.S. Navy Blue Angels for patriotic air displays. Come early and stay late (the fireworks start at 10:30 pm)! While you’re in the area, visit the Sleeping Bear Dunes National Lakeshore. The Pierce Stocking Scenic Drive and Dune Climb are especially fun for families. 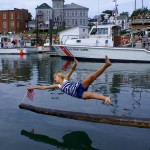 Welcome to the easternmost city in the US — Eastport, Maine. Home to the largest 4th of July festival in the state of Maine, Eastport hosts festivities over a long five-day weekend to celebrate our nation’s independence and “Old Home Week” when Maine natives return from all over the world. Boat races, BBQ, concerts, craft fair, reunions, parades and several fireworks displays all make for a busy weekend that your family might make a lifelong tradition. If you’re on a road trip, Maine also hosts notable hometown celebrations in Bar Harbor, Bath Heritage Days and Greenville.

Mount Vernon
George Washington’s historic home, Mount Vernon, will host special 4th of  July events this year, including daytime fireworks. The fireworks are made from colored smoke and will be fired over the Potomac River. The event also includes an inspirational naturalization ceremony for 100 new citizens, military reenactments, a special wreathlaying ceremony, free birthday cake, and a visit from the “first” first couple, “General and Mrs. Washington.” The activities begin at 9:30 am and conclude in early afternoon so your family has plenty of time to grab some picnic lunch and find seats for the evening fireworks of your choice.

Florence, Alabama
For almost 30 years, families have gathered on the banks of the Tennessee River in Florence, Alabama for the annual fireworks celebration. A barge in the middle of the river shoots fireworks set to patriotic music. The festival goes all day with music, kids activities, games, and food concessions. The festival has always been free, but with 30,000 people attending the fireworks, some families line up the night before the event in order to secure a prime spot. Other best spectator views are found in boats on the river, the bluffs across the river from the park, on rooftops around Florence and in various parking lots in downtown (Florence is elevated about the riverbank). 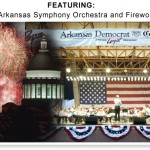 Pops on the River is the largest Independence Day celebration in the state of Arkansas. A concert by the Arkansas Symphony Orchestra is the focus of the evening — bring your lawn chairs and blankets and enjoy the top five finalists of the “Oh, Say! Can You Sing” competition performing at 6:30 p.m. The Happy Tymes Jazz Band takes the stage at 7 p.m. followed by the symphony at 8:30 p.m. A huge fireworks display closes out the event at 9:30 p.m. If you’re looking for some free family fun before the fireworks, check out this list of free activities in the area. 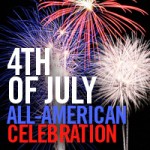 On the 1st, attend the Grammy Award-winning Atlanta Symphony Orchestra’s All-American Celebration at Verizon Wireless Amphitheatre.  Raise your flag with an exciting evening of patriotic sing-alongs, Tchaikovsky’s stirring 1812 Overture, and a jaw-dropping fireworks show. Spend the weekend in Alpharetta exploring the over 750 acres of parkland, only American Girl Boutique and Bistro in the Southeast, 13 trails within a 20-mile radius, seven unique shopping districts and over 150 dining options. On the fourth, head over to Wills Park where the City of Alpharetta’s Recreation and Parks Department offers families a free evening of fun. Activities for children, entertainment and a spectacular fireworks show top off a weekend of pure Americana. A spectacular fireworks display begins at 9:45 p.m. on the downtown riverfront. River barges will be located in front of The Jacksonville Landing and the Hyatt Regency Jacksonville Riverfront Hotel with strobes on both sides of the Main Street Bridge and the east side of the Acosta Bridge. Fireworks can be viewed from the Northbank and Southbank of the St. Johns River. The downtown Jacksonville area also has special events and promotions in the week leading up to the 4th. 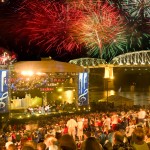 Nashville’s Music City July 4th “Let Freedom Sing” event is consistently ranked one of the best in the nation. The fireworks take place at Riverfront Park, overlooking the Cumberland River in downtown Nashville and are accompanied by Music City’s best singers and musicians, including the Grammy-nominated Nashville Symphony. The festival lasts all day and the free family fun zone will be a hit with younger kids. Live music will be offered beginning in the afternoon and playing through the night. Trace Adkins headlines the show with artists like Julianne Hough, Jaci Velasquez, Damien Horne and others also performing.